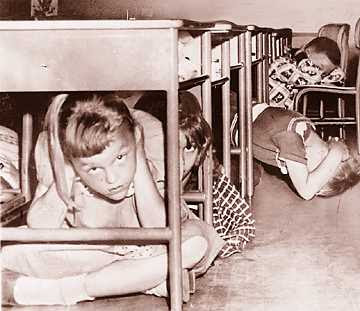 It should have come as no surprise to anyone who has paid any attention to Michele Bachmann over her second term in Congress that her campaign strategy with regard to debates this year would follow the old nuclear attack films shown to grade schoolers in the 1950s: duck and cover.

The Teabagging congresswoman has shown nothing but contempt for her constituents and anyone but the most accommodating and fawning media since her infamous appearance on Chris Matthews’ “Hardball” that almost derailed her re-election in 2008.

Once secure in her $174,000 government job for another two years, Bachmann has thumbed her nose at media requests for interviews and clarifications of her half-truths and outright lies. She holds the record at the Pulitzer Prize-winning PolitiFact of the St. Petersburg Times newspaper for Pinocchio-like behavior, racking up an incredible 0-11 record for telling the truth.

Bachmann has held only one public meeting during her entire four years in Congress at which constituents have had the opportunity to address her unfiltered by screeners and staff. Instead, the invisible congresswoman has opted for the safety of one-way communication through faceless “tele-town hall” meetings during which she and her handlers determine which constituents and questions she will respond to.

During this campaign season, Bachmann has predictably ignored invitations to debate her two opponents, DFLer Tarryl Clark and IP candidate Bob Anderson, until public pressure from even the normally reticent mainstream media became too great. And now that we are less than a month out from the Nov. 2 election, Bachmann has cowardly agreed to a mere three debates—none of which will be before a live audience and only one of which will even be in her district.

The most glaring example of how Bachmann has abrogated her duty to represent the 6th Congressional District is the October 7 debate sponsored by the Minnesota Broadcasters Association that was scheduled to be broadcast from WCCO’s television studios—again, insulated from a living, breathing audience of her constituents.

Further attempts to get Bachmann to commit to a debate sponsored by the organization that represents Minnesota’s broadcast community were futile.

“We never did receive a response from Congresswoman Bachmann’s office,” says du Bois. “We kept open the option of going with the debate with just two of the three candidates, but we weren’t really sure we could get it done within the timetable WCCO had.” Eventually, explains du Bois, “We waited so long that WCCO’s window went away … It came up to the wire and we lost the opportunity to debate.”

Was Bachmann too busy with her congressional duties that she couldn’t find time to even respond to the MBA, much less debate? Hardly. As it turns out, she had other priorities that superseded such menial obligations before the unwashed masses. 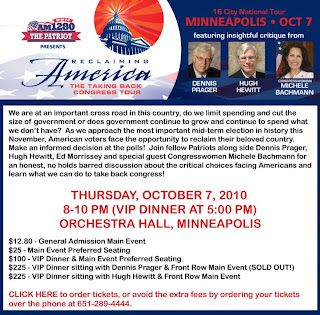 Bachmann was scheduled to offer her “insightful critique” at the “Reclaiming America: The Taking Back Congress Tour” sponsored by wingnut radio WWTC at Orchestra Hall that same night—a half-block away. Clearly, the choice was easy for Bachmann: spend a night debating her opponents in the most expensive congressional race in America, or spend a night hobnobbing with the likes of Hugh Hewitt, Ed Morrisey and Dennis Prager at a $225-per-VIP soiree.

This isn’t the only debate Bachmann is skipping out on. She couldn’t even find the time to respond to an invitation from the Stillwater Gazette, her hometown newspaper, to a debate it’s sponsoring Oct. 12 before a live audience in Stillwater. But that may be more understandable. Even her neighbors have rejected their local darling in her last two congressional elections, and facing that crowd could get a little uncomfortable.

Sadly, Bachmann’s duck-and-cover strategy may work. The three debates to which she has agreed are being held during the last week of the campaign, giving little time for voters to digest their results before heading to the polls Nov. 2. Instead, they’ll have to settle for hearing from their congresswoman in a multimillion-dollar barrage of ugly tv commercials and a blizzard of glossy brochures in their mailbox.

Better to keep ‘em dumb all over.
Posted by Karl Bremer at 9:08 PM