Ponzi Politics: Why aren’t political contributions being clawed back to compensate victims of Minnesota’s Ponzimen and fraudsters? 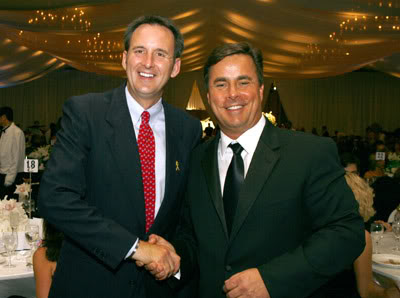 Minnesota is starting to look like the “Land of 10,000 Ponzi Schemes.” Hardly a month goes by before another Ponzi scheme unravels or another fraudster is exposed around here.

As bankruptcy trustees initiate “clawbacks” to try to recover ill-gotten gains from Ponzi profiteers and return them to their victims, one group seems to have escaped their attention: politicians. Many Minnesota politicians have benefited mightily from the largesse of the state’s Ponzimen, yet not one has been asked to give back their political contributions that were derived from illegal activity.

Some pols have donated to charity a portion of their contributions from these Ponzimen and alleged fraudsters. But while that may help cleanse the taint from a politicians’ image, it does little for the victims from which this money was stolen in the first place.

One reason no one is anxious to go after political Ponzi money could be because everyone seems to have some blood, er, grease on their hands. But if these bankruptcy trustees are looking for victims’ money that’s relatively painless to recover, political contributions would appear to be pretty low-hanging fruit.

The public shame of hanging onto it should be enough to get these politicians to return that dirty money to its rightful owners without a lot of legal wrangling. There always seems to be more where that came from anyway.

In the grand scheme of multibillion-dollar fraud cases, a few hundred thousand dollars in political contributions might not seem like much. But it could provide relief for at least a few of the innocent victims of these con artists.

An examination of political contributions by Minnesota’s three most well-known Ponzimen or alleged fraudsters and their wives reveals that Republicans are the favored—but by no means the only—politicians they give to. Convicted Ponziman Tom Petters, Petters associate and convicted felon Frank Vennes, Jr. (who has not yet been charged with a crime in the Petters case) and auto-magnate-gone-wrong Denny Hecker all gave to Republicans and Democrats, although Petters was somewhat more evenhanded. Republican Governor and presidential wannabe Tim Pawlenty, DFL Senator Amy Klobuchar, and former Republican Senator Norm Coleman are the only Minnesota politicians who have received money from all three.

Below are totals over the past decade of the political generosity shown to Minnesota politicians and presidential candidates by Denny and Tamitha Hecker, Tom Petters and Tracy Mixon, and Frank Jr. and Kimberly Vennes. Republican candidates, parties and funds are shown in bold. Draw your own conclusions about why who gave to whom.

In the case of Vennes, it’s clear that the convicted money launderer/cocaine-and-gun runner was after a presidential pardon—and he got letters from Michele Bachmann, Tim Pawlenty, Norm Coleman and state GOP chair Ron Ebensteiner seeking just that.

If churches, schools and employees are being asked to return money stolen from victims of Ponzi schemes and other frauds, isn’t it time that Minnesota politicians be subjected to the same clawback of their dirty money as well?
Photo above: Governor Tim Pawlenty and Ponzi Pal Tom Petters