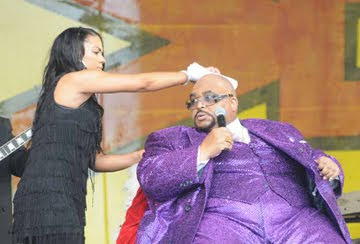 Legendary rock and soul singer Solomon Burke passed today at the age of 70. He died on a flight enroute from Los Angeles to Amsterdam, where he was to perform at a sold-out show. Burke had a voice as big as the man himself, and he never failed to deliver it with the power of a freight train in a career that spanned a half-century. 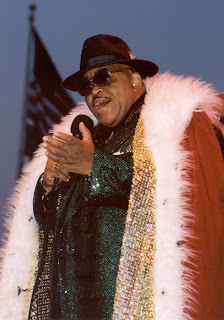 Burke started out as a preacher and host of a gospel radio show in Philadelphia before he signed with Atlantic records in the 1960s. There, he launched a Grammy-award-winning career with such classic hits as Cry to Me, covered by Professor Longhair, the Radiators and Minneapolis bluesman Dave Ray, among many others, and Everybody Needs Somebody to Love, famously covered by the Rolling Stones. Check out versions of both songs below. Burke was inducted into the Rock and Roll Hall of Fame in 2001.

Above: Solomon Burke gets a cooling pat-down by one of his many grandchildren during his fest-topping Congo Square performance at the 2009 New Orleans Jazz & Heritage Festival. Right: Solomon Burke arrived onstage like royalty at his 2005 performance at Duluth's Bayfront Blues Fest. --Photos by Karl Bremer