Lawsuit renews discussion of the temperament of the 'Wright County Bully.' 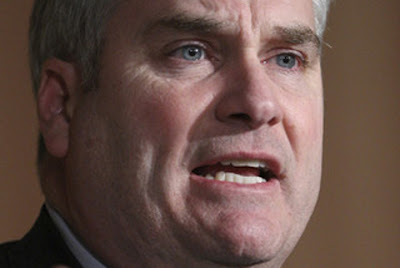 Ripple in Stillwater’s exclusive October 7 report about the attorney malpractice lawsuit filed against Republican candidate for Minnesota governor Tom Emmer made waves coast to coast with accounts from the Washington Post to the Seattle Post-Intelligencer. It spread like wildfire throughout scores of other media outlets and blogs around the country. Some, like the Pioneer Press’s Jason Hoppin and the AP’s Brian Bakst, gave us credit for breaking the story, while others did not. Such is the way of the internets.

Emmer campaign spokesman Carl Kuhl, who seemed to be offended at being contacted for a response on his candidate’s malpractice lawsuit, never did respond to Ripple in Stillwater further, despite his promise to do so.

He did find time to talk to the AP, however, where he suggested that plaintiff and former Emmer friend and supporter Steven R. Hackbarth’s motives were anything but pure, and compared Hackbarth's pursuit of a legal settlement to “extortion.”

“While Mr. Hackbarth denies political motivation, he made outrageous financial demands prior to filing his suit in the hope of leveraging Tom Emmer's candidacy to advantage himself,” Kuhl told the AP. “Tom Emmer does not negotiate with extortionists.”

Emmer, himself, is trying to link Hackberth’s 2009 house fire to his innocence in the malpractice lawsuit. According to the Pioneer Press report:

“The circumstances surrounding the fire have been called into question by the fire inspection report,” Emmer wrote in asking a judge to dismiss the malpractice case. “Additionally, other circumstances regarding the fire at Hackbarth's home will be divulged if this litigation survives ... as the facts of the fire are necessary to establish the absence of fault in (Emmer’s) defense of this baseless action.”

That raises the question as to whether it's legal for a person to withhold from authorities any information they claim to possess regarding a suspicious fire, for any reason.

Ironically, the day after Ripple in Stillwater broke the story about a small independent businessman sueing Emmer for malpractice, Emmer was endorsed by the National Federation of Independent Businesses, which purports to represent the interests of independent businesses.