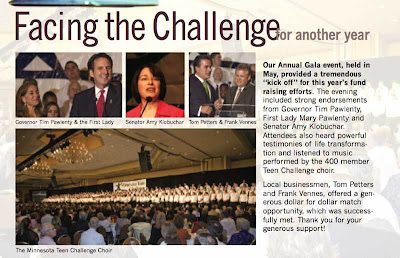 "Pardon me" may be two words the presidential wannabe wishes he never heard.

A criminal sex offender recommended for a “pardon extraordinary” by Gov. Tim Pawlenty in 2008 was arrested again in November on multiple criminal sexual conduct and incest charges. But this isn’t the first time Pawlenty’s pardon subjects have run afoul of the law after getting his blessing.

In 2002, Pawlenty sought a presidential pardon for convicted money-launderer/cocaine-and-gun runner Frank Vennes, Jr. That same year, Vennes and his family donated a total of $10,000 to his gubernatorial campaign, and thousands more in 2004 and 2006.

But then on Sept. 24, 2008, federal agents raided Vennes’ $5 million Shorewood home on Lake Minnetonka and his $6 million oceanfront home in Jupiter, Fla., in connection with the Tom Petters Ponzi scheme investigation. According to the federal search warrant, Vennes was alleged to have hauled in more than $28 million in commissions for his role in luring five investors to pony up $1.2 billion in Petters’ giant Ponzi scheme.

On Oct. 6, 2008, the assets and records of Vennes, Petters, Petters’ companies and other Petters associates were frozen by a federal judge, and many seized assets of Vennes’ already have been sold off to compensate victims of the fraud, even though Vennes has never been charged with a crime in the case. Vennes recently proposed a plan to liquidate most of the rest of his assets in exchange for immunity from further lawsuits in the Petters case.

Pawlenty has never responded to requests for an explanation of his apparently close relationship with Vennes. But when the national media begins to scrutinize the struggling presidential candidate’s past a little closer, the subject of Pawlenty's pardon for Vennes is sure to come up.

Last year, Pawlenty donated nearly $86,000 from his defunct gubernatorial campaign fund to Minnesota Teen Challenge (MnTC), a controversial Christian chemical dependency program that was once closely affiliated with Vennes and allegedly lost millions on account of that affiliation in the Petters Ponzi. Additionally, Pawlenty’s wife, Mary, served on Minnesota Teen Challenge’s Board of Directors with Vennes.

Vennes and his family have contributed thousands of dollars to Pawlenty's gubernatorial campaigns. Kimberly Vennes (Frank's wife), Gregory Vennes, Stephanie Vennes (Gregory's wife), and Colby and Denley Vennes, who have shared an address with Frank and Kimberly, each donated $2,000 to the Pawlenty for Governor Committee in 2002. Frank, Kimberly, Gregory, Stephanie, Colby and Denley Vennes each contributed $250 to Pawlenty in 2004 and $2,000 apiece in 2006.

Was it a coincidence that the same year the Vennes money started to flow into Pawlenty's campaign coffers, Pawlenty's name appeared in a request for a presidential pardon for Vennes sent by Senator-elect Norm Coleman?

The roles of Pawlenty and Eibensteiner in seeking a pardon for Vennes are unclear. A Freedom of Information Act request with the Office of Presidential Pardons did not turn up pardon letters from either one, and Pawlenty's office has refused to respond to requests for an explanation as to why he added his name to Coleman’s list of pardon supporters.

The pardon Coleman, Pawlenty and Eibensteiner sought was for Vennes' conviction in 1987 on federal charges of money laundering, cocaine distribution and illegal firearms sale, to which he pleaded guilty and no contest.

Vennes was sentenced to five years in the Sandstone Federal Correctional Facility, where he reportedly “found God” and was released in 1990. Following his release from prison, Vennes filed a petition for a pardon, which has never been granted.

Meanwhile, Vennes was a board member of MnTC as recently as 2008. Pawlenty's wife, Mary, also sat on MnTC's board of directors during at least a portion of the time that Vennes served on the board.

But that organization may have lost millions of dollars as a result of MnTC's investments that Vennes allegedly steered to his associate, Tom Petters, in Petters’ multibillion-dollar Ponzi scheme.

Vennes is alleged to have been a facilitator, or conduit, used by Petters to lure primarily Christian organizations into investing in Petters' companies through Metro Gem - one of Vennes' companies - or through the Fidelis Foundation, which served as a fiscal agent for Minnesota Teen Challenge. Among those investors was Minnesota Teen Challenge, which allegedly lost $5.7 million in investments in Petters companies.

Still, Vennes has not yet been charged with any crimes in connection with the Petters case. Nor has he been named as a defendant in any of the lawsuits filed against Petters and his associates by alleged victims of the fraud.