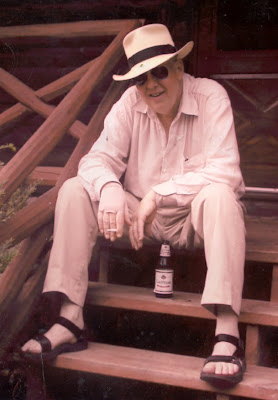 It’s after midnight, and as I peer over at the stack of recently played CDs below the stereo, I notice a preponderance of Koerner, Ray & Glover and Dave Ray discs strewn about. Oh, that’s right. Thanksgiving’s coming up.

Dave “Snaker” Ray left us on Thanksgiving Day 2002 after a ferocious battle with cancer (is there any other kind really?). So just as new constellations come into the rotation of the night skies with each passing month, Dave Ray goes into heavy rotation in the CD player every November.

I got to know Dave through decades of seeing him play in West Bank Minneapolis haunts—the Triangle Bar, the Viking, the 400, Coffeehouse Extempore—and those intimate Ray & Glover Thursday night sessions at the Times downtown. We’d get treated to an annual reunion of the legendary folk-blues trio Koerner Ray & Glover with Dave’s erstwhile bandmates “Spider” John Koerner and Tony “Little Sun” Glover. But throughout the rest of the year, you could almost always count on finding Dave playing somewhere at least once a week. Solo, duo, trio, full band, it didn’t matter, Dave would be out there mining obscure blues and other rare gems from his big black songbook, keeping that West Bank flame kindled.

Dave had an extraordinary baritone voice that was as big and black as that songbook of his; it could fill a room without a mic. And he could rip off some of the most dazzling fretwork you ever laid ears on. In 1999, I wrote in the liner notes to “By the Water,” a CD recorded in our living room that featured Dave, Tony and Radiators Camile Baudoin and Reggie Scanlan:

“Dave’s raw, honey-dipped voice shifts effortlessly from gut-bucket blues shouter to crooning balladeer, while he picks notes off a 6- or 12-string like sweet cherries from a tree.”

Always ready with a twisted joke, Dave had a deep belly laugh that shook his whole body, and a sardonic, stiletto wit that he exhibited in full glory in his online rants. Dave Ray was a blogger before there were blogs, and fortunately, his ruminations are archived here.

In one online entry, after offering some driving “tips” to an unidentified driver with whom he had had a recent road encounter, Dave concluded with some friendly counsel: 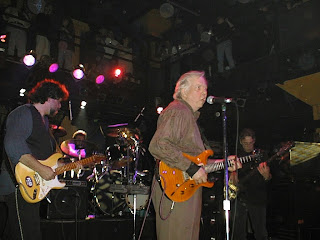 “If you choose to ignore this advice (and the sundry other suggestions hailing down on you in numbing quantity from everyone unfortunate enough to share your vehicle while you’re driving) then at least accept this final suggestion: put a bag over your license plate before you leave your driveway in case the next guy you infuriate decides to plunk down his five bucks at the DMV, get your home address and blow both your godammed cheeks off so you’ll never sit behind the wheel again.”

We had the good fortune to have had Dave play for many of our house parties. He and Tony performed for at least a half-dozen of our fundraisers for political candidates. And although every one of them lost, we still had candidates begging us to throw parties for them every election year. 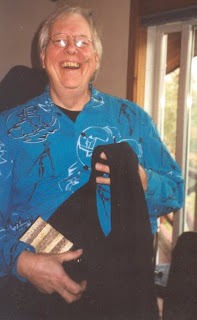 I was thrilled when Dave got the trio—Koerner, Ray & Glover—to play for our 20th anniversary in 1998. But when it came time to pay Dave for the gig, he inexplicably refused to take any more than 1/10th of the price we had agreed on. He muttered something about “Well, you know, Happy Anniversary” and that was that.

Dave kept performing right up until the end. Koerner, Ray & Glover played a gig on the East Coast six days before he died. A planned KR&G show at First Avenue the following month turned into a massive memorial for Dave, with an empty chair and Dave’s hat sitting on stage with Koerner and Glover. There wasn’t a dry eye in the joint that night.

There’s some good news for Dave Ray fans in all of this. Koerner, Ray & Glover’s last filmed performance from First Avenue in January 2002 is going to be released on DVD December 15 at First Avenue’s 40th anniversary party (available also at the Electric Fetus and Cheapo Records). Dave’s first two solo records, “Snaker’s Here” (1965) and “Fine Soft Land,” (1967) have been re-released on CD on Wounded Bird Records. And another 2002 recording session featuring two songs Dave laid down with Eddie Kirkland is being readied for release in 2011.

So this Thanksgiving, I’ll give thanks for Dave Ray and all the other fine musicians that make us smile and dance and laugh and cry. The best ones do it for the music and not for the money. Concludes Tony Glover in the terrific documentary “Blues, Rags & Hollers: The Koerner, Ray & Glover Story”:

“Music’s one of my oldest friends. We don’t expect to get rich off old friends. You just figure they’ll be there when you need them. Music usually is.”