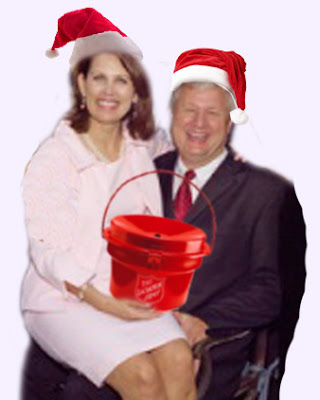 Two weeks before Christmas and a mere six weeks after Bachmann raked in an obscene $13.5 million—mostly from outside the 6th District—to get re-elected, Bachmann has already sent out her first plea for money in the 2012 campaign.

According to The Hill, Bachmann, who is still sitting on nearly $2 million left over from her 2010 campaign, sent a desperate email to supporters Dec. 14 designed to strike fear in their hearts about a rematch with Democratic challenger Tarryl Clark in 2012:

“With Barack Obama at the top of the ticket she’s likely hoping to ‘ride his coattails’ to victory and see me defeated once and for all,” Bachmann wrote.

“And it appears she may be starting to amass an even larger war chest then she did in this last election cycle. FEC records show that my opponent raised more money then any Democrat (sic) challenger in the entire country, and she has the capacity to raise even more money if she challenges me again.”

Bachmann went on to ask for donations to bankroll her 2012 re-election bid and to “support my outspoken opposition to Obama’s socialist agenda.”

It’s bad enough that Bachmann has desecrated the holiday season with her begging. With her crass holiday appeal for campaign cash, Bachmann also has put herself in direct competition with the hundreds of legitimate charities and nonprofits in need that rely on end-of-the-year donations to shore up their budgets. But why support food shelves when you can help fill the tank of Michele’s tour bus?

It’s a testament to how out of touch Bachmann is with her constituents that she sees nothing wrong with horning in on Christmas to shill for her campaign two years from now. But her cluelessness comes as no surprise to anyone who follows her mean-spirited voting record.

About 7 percent of Bachmann’s constituents are unemployed, and many are set to lose their benefits unless a one-year federal extension is passed as part of the tax-cut “deal” between Obama and Republicans. Yet Bachmann cited extension of unemployment benefits to her out-of-work neighbors as the primary reason she virulently opposed the tax-cut package.

Foreclosure rates among Bachmann’s constituents are at record levels, and yet Bachmann, a wealthy congresswoman living in a million-dollar manor on a golf course, has voted against virtually every foreclosure-relief measure that’s come before her as well.

This kind of tasteless yuletide pitch for political contributions is a new low in fundraising, even for a parasite like Bachmann. Minnesotans should respond with lumps of coal for the congresswoman instead this holiday season.
Photo illustration of Michele and Marcus Bachmann by Ken Avidor.
Posted by Karl Bremer at 7:49 AM