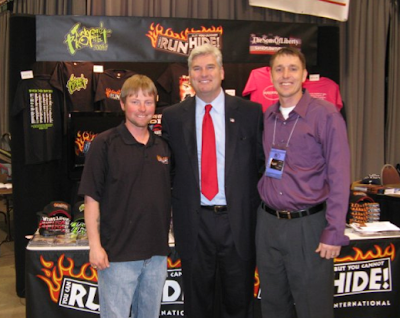 Notorious Washington tax cheat Glen Stoll worked with You Can Run But You Cannot Hide International to set up 'ministerial trusts.'

Did Annandale-based anti-gay hatemonger Bradley Dean Smith cut loose his You Can Run But You Cannot Hide (YCR) “ministry” from tax violator Glen Stoll in 2008 because the federal government sent one of Stoll’s other whacky ministerial trust customers to prison on federal tax violations the year before?

Kent Hovind, along with his wife, Jo Hovind, ran Creation Science Evangelism in Pensacola, FL. Among the group’s endeavors was Dinosaur Adventure Land, a sort of cheesy theme park for creationists. Working with Stoll’s Edmonds, Wa-based Remedies at Law beginning in 2002, the Hovinds concocted the Creation Science Evangelism Ministry under the auspices of a corporation sole, “Director of Ecclesiastical Enterprises,” as trustee in 2003. Stoll issued the ministry a business license from the “Kingdom of Heaven” — the same “Kingdom of Heaven” in which Bradley Smith claimed citizenship.

The Hovinds’ enterprise as described in a 2009 property forfeiture proceeding filed in U.S. District Court in Pensacola sounds virtually identical to Bradley Smith’s “ministerial trusts” for YCR. Except that Kent and Jo Hovind got caught using their ministry to evade taxes, and Kent is still serving a 10-year sentence in federal prison. Kent Hovind, known as “Dr. Dino,” was convicted by a jury in 2006 on 58 charges including failing to pay payroll taxes for his employees, structuring financial transactions to avoid reporting requirements, and “corruptly endeavor[ing] to obstruct and impede the due administration of the internal revenue laws.” Jo Hovind was convicted on 44 counts.

Among the properties ordered forfeited to pay off the Hovinds’ more than $600,000 judgment was Dinosaur Adventure Land. Stoll tried to get his hands on some of the Hovinds’ property before it was forfeited, claiming to be a trustee, but was rebuffed by a federal judge.

Kent Hovind is currently jailed at Jesup Federal Correction Institution in south Georgia. He recently appealed to have his sentence vacated. Jo Hovind was sentenced to a year in prison and was released in 2009.

At about the same time the Hovinds’ tax-evasion convictions and property forfeitures were making news in 2008, Bradley Smith, known to his follows as "Bradlee Dean," and his “co-minister” Jacob MacAulay began to take legal action to sever their ties with Stol 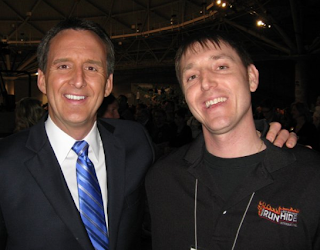 You Can Run But You Cannot Hide was originally established in 1999. It filed federal IRS Form 990s in 2001 and 2002. Smith established his YCR and Old Paths Church trusts with Stoll in 2005, but no federal Form 990s can be found for YCR at either the Minnesota Attorney General’s Office or Guidestar.org until 2008, when it was reincorporated as You Can Run But You Cannot Hide International, Inc.

“2008 is this ministry’s first year of existence,” YCR’s 2008 Form 990 states. Technically, that may be correct, as “International” wasn’t added to the group’s name until 2008. But Bradley Smith had been operating an organization under the You Can Run But You Cannot Hide banner for nearly a decade prior to that.

What happened to YCR’s taxes between 2003 and 2008? Were they ever filed? Did YCR employees pay taxes? Did the IRS even know of YCR’s existence?

Smith and YCR declined to comment on their relationship with Stoll or the IRS.

According to the permanent federal injunction ordered against Stoll in 2005, Stoll falsely told his customers that “church ministries are not required to notify the IRS of even their existence, much less their exemption from taxation and return filing requirements.”

The federal injunction states that Stoll also falsely advised his customers to take such illegal tax-avoidance steps as classifying employees as independent contractors, not report compensation to the IRS and to make payments to their ministerial trusts rather than individuals so income can be more easily hidden from the IRS.

And, court documents state, Stoll advised and assisted his customers in transferring their pre-tax income to offshore bank accounts in the Caribbean and advised customers on how to circumvent U.S. banking laws.

Next in this investigation of Bradley Dean Smith's tax-exempt Annandale, MN-based "ministry," You Can Run But You Cannot Hide International, we’ll take a closer look at the extremist anti-tax religious cult Embassy of Heaven, for whom Smith renounced his allegiance to the world and pledged his citizenship.