Bradley Dean Smith was a member of the Embassy of Heaven until September 2010; Scott Roeder picked up much of his anti-government hatred from the Oregon extremists a decade before he gunned down Dr. George Tiller in 2009. 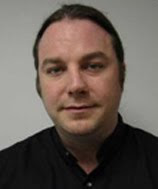 What does Bradley Dean Smith, president of Annandale-based anti-gay hate ministry You Can Run But You Cannot Hide International (YCR), have in common with Scott Roeder, murderer of Kansas abortion provider Dr. George Tiller?

Both were affiliated with the Embassy of Heaven, a virulently anti-government religious cult in Oregon.

The Embassy of Heaven is described in “Investigating Terrorism and Criminal Extremism,” a 2010 report by the Institute for Intergovernmental Research funded by the Department of Justice, as:

“A religious/antigovernment group in Oregon headed by “Paul Revere,” the alias of a former computer analyst named Craig Douglas Fleshman. Fleshman started the Embassy of Heaven Church in 1987; it preaches a total separation from “earthly” government. Embassy members continue to make and sell the bogus license plates and other paraphernalia-18. Committed Embassy of Heaven adherents rarely ever show up for court dates and frequently go on hunger strikes when jailed.”

“Revere” himself has had a number of run-ins with the law over the years. In 1997, he and his family were evicted from their wooded property in Marion County, Oregon, for nonpayment of $16,000 in back taxes and jailed.

SMITH JOINED GROUP IN 2003
Smith, aka “Bradlee Dean” to his followers, was “baptized” into the extremist organization in 2002, according to his identification card verification posted on the group’s website. His ID card was issued on September 30, 2003, and expired September 30, 2010. 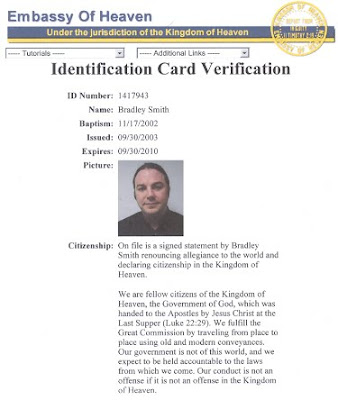 When Smith and YCR hired Glen Stoller in 2005 to set up what they later described in court documents as “sham ministries” for YCR and its sister organization Old Paths Church, Stoller promised that part of the package would be identification cards and other materials from the Embassy of Heaven. But clearly, Smith already was involved with the group at least two years prior to that. 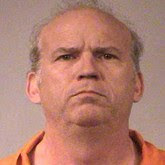 Roeder, who was sentenced to life in prison for gunning down Tiller in a Wichita, KS, church during a Sunday service in 2009, also shared allegiance to the Embassy of Heaven with Smith.

A federal investigation was launched after Tiller’s murder to determine whether Roeder acted alone or in concert with any organization.

According to the Wichita Eagle:

Documents from his 1996 divorce case indicate he was affiliated with the Embassy of Heaven Church in Stayton, Ore., during much of the 1990s. The group's leader, who goes by the name Paul Revere, wrote letters to Johnson County court officials in 1999 offering to pay Roeder's back child support.

"We have faithfully informed the District Court Trustee that Scott P. Roeder is on assignment for us in the mission field and that we are handling his affairs," Revere wrote Aug. 10, 1999.

Revere said that Roeder wanted his wife and child to “return to his side,” saying that would be biblical.

Revere told the Kansas City Star on Thursday that the Embassy of Heaven was “a country.”

“We represent the Kingdom of Heaven, God's government on Earth,” he said. The group issues its own driver’s licenses, identity cards and passports for members. Over the years, followers have found themselves in legal trouble for rejecting government authority. Revere said he didn't know Roeder had been charged in Tiller’s death. After checking Roeder’s file, Revere said Roeder during the 1990s had been training with and receiving materials from the Embassy of Heaven but never “made his statement of citizenship in the Kingdom of Heaven.”

Revere said he never met Roeder and that after he sent the letters to the court on Roeder's behalf, he never heard from him again.

Revere said his group did not condone Tiller's killing. “Killing anybody is a violation of our law,” he said.

Roeder's ex-wife, Lindsey Roeder, said in an interview last week that she told the FBI about the Embassy of Heaven.

“I used to hide their literature from Scott,” she said. “He wanted to send the title of our car to them.”

Like Roeder, Smith is also rabidly anti-abortion, although there is no indication that Smith has ever advocated violence against abortion providers.

Smith has declined to comment on his "citizenship" with the Embassy of Heaven.

EMBASSY OF HEAVEN HONOR ROLL
Other fringe elements affiliated with the Embassy of Heaven include:

John Joe Gray, who has been at a standoff with law enforcement authorities at his home in rural Texas for over a decade. According to ABC News:

John Joe Gray got into trouble with the law last spring, when a car he was riding in was stopped for speeding. According to the state trooper who pulled him over, Gray was carrying a pistol — illegally .

The two men ended up in a scuffle, with Gray biting the officer. Later indicted, Gray refused to appear in court, saying that he acted in self-defense and that the entire judicial system is corrupt and conspiring against him. In protest, he now refuses to obey the law, including paying taxes, and has lived inside an armed camp for the past six months. His compound — which has no electricity or running water — is about an hour’s drive from Waco, the scene of the deadly Branch Davidian stand-off in 1993.

Inside the compound, the vehicles have license plates “issued” by a church called the Kingdom of Heaven. The American flag hangs upside-down. A sign that reads “Kids Inside” stands above a bunker, and sandbags, presumably to be used for cover in case of an attack, rest on the dirt ground. Two years worth of food is stockpiled. And throughout the compound, all the adults carry weapons.

If authorities try to take the children by force, Gray says he will defend himself — and his right to live as a free man — to the end. “I’m willing to die for it, because how else could you live,” Gray says. “They can take my land, you know, OK. They can take my life. But they can’t take my freedom.”

Richard Allen Shiarla, who, according to the Orlando Sentinal, “found God, rid himself of most of his earthly possessions and established Embassy of Heaven Church” in Longwood, FL. As pastor of his church, the Sentinal reports, Shiarla now goes by his “Christian name” of Richard Allen.

According to the Sentinal:

Allen, 38, is trying to have the house at 112 Pineapple Court in Longwood declared tax-exempt because it is part of Embassy of Heaven Church. The house serves as the pastor's home and the church's spiritual counseling center. Baptisms are performed in the backyard swimming pool. The Internal Revenue Service and the state of Florida recognize Embassy of Heaven as a legitimate church, he said.

The church's claim for tax exemption may seem reasonable. The property was deeded to the church, and most churches pay no property taxes. But Allen's approach has created a stir at the Seminole County Property Appraiser's Office.

Allen and his flock, which numbers between 50 and 100, say the church is a sovereign nation and the church building is a foreign embassy. He said he established the embassy under the rules of the Vienna Convention on Diplomatic Relations, a document signed into law by President Richard Nixon in 1972.

That document requires all signatories to recognize missions established on their soil, and it makes all such missions parties to the convention.

Some members of the church have given back their drivers licenses, abandoned their Social Security numbers and carry red ''passports'' identifying them as citizens of the Kingdom of Heaven. Some of their cars have tags issued by the church.

Allen acknowledges those actions are similar to high-profile, anti-government groups, but he said he has no quarrel with the government. Allen and his followers simply answer to a higher authority, he said.

Patrick Henry Talbert was a key associate of Gerald Payne, who along with Talbert was convicted in 2001 for running a $500 million Ponzi scheme. Talbert is serving a 19-year prison sentence on multiple counts of conspiracy, fraud, and money laundering for his role in the Payne Ponzi scheme.

Talbert was a self-declared “sovereign citizen” and “Ambassador of the Kingdom of Heaven” who proclaimed that ordinary laws and courts had no jurisdiction over him. He advanced that argument in court when charged in 1997 with multiple counts of racketeering, fraud and other crimes related to a separate pyramid scheme. At one point, Embassy of Heaven leader Richard Allen Shiarla intervened on Talbert’s behalf.

Talbert’s novel defense ultimately got him a 10-year prison sentence for his crimes.

Michael Didier is a deadbeat dad in Washington who tried to avoid paying child support for his three children after his wife petitioned for separation and child support in 2004. Michael said the state lacked jurisdiction because he was a “member of the Kingdom of Heaven and served only Jesus Christ.” Michael also claimed he could not pay child support because “as a church “missionary,” he did not have an income and had taken a “vow of poverty” that precluded him from accepting paid employment.”

However, Didier’s wife told the court that he made thousands of dollars advising people on setting up churches and trusts to avoid paying taxes. According to court records, the address Didier gave the court is the same address as Glen Stoll’s Remedies at Law, which organized Bradley Dean Smith’s sham ministerial trusts.

The court didn’t buy it, calling Didier’s reasoning “circular.” Michael Didier was ruled in contempt of court and ordered to pay $4,900 in child support.


IS SMITH STILL A 'CITIZEN'?
Although the Embassy of Heaven advocates checking out of government altogether, and many of its adherents have been convicted of tax evasion and other crimes, there is no evidence at this time of any illegal tax activity on the part of Bradley Dean Smith, YCR or Old Paths Church.

Based on an examination of Wright County tax records for property owned by Smith, Old Paths Church and the Family Defense League - the sham trust they established with Glen Stoll - it appears that taxes on those properties have always been paid on time and in full. Vehicles seen at YCR’s Annandale headquarters also appear to be properly licensed, rather than bearing license plates from the Kingdom of Heaven.

Bradley Dean Smith severed his ties with Glen Stoll and his illegal tax scams in 2009. It’s not known whether Smith did the same with the Embassy of Heaven when his "citizenship" in the Kingdom of Heaven expired last September.