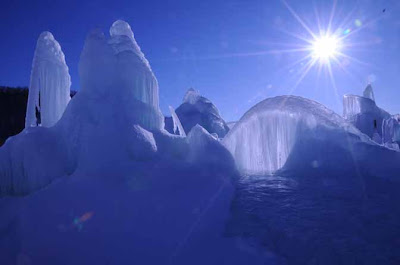 Eight miles beyond Ellsworth on U.S. 10, just before crossing the Rush River, turn right on scenic County Road A and after it snakes along the river for 3 or 4 miles, you’ll see them looming out of the valley floor like some frozen Mordor. Dozens of giant ice formations dot the little farm along the river in the T 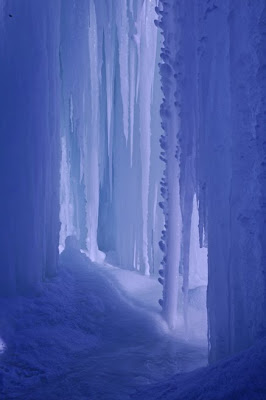 Some resemble giants, others prehistoric beasts. Let your imagination go wild and they could be most anything. Many would be right at home in an underground cavern amidst the stalactites and stalagmites.

But what are they, and why are they here?

They’re the creation of Roger Nelson of Ellsworth, who owns the former farmstead in the Rush River Valley and now uses it as a “deluxe huntin’ shack.”

Nelson, a plumber by trade, doesn’t really know why he started his frozen sculpture garden 10-12 years ago. But he clearly enjoys doing it, and in fact, three or four years ago, he nearly doubled it in size.

The secret—besides subfreezing temperatures—is the artesian well that is the source for the ice. Artesian wells, common in this coulee country of western Wisconsin, are fed by aquifers whose sources lie in porous rock formations at higher elevations. The pressure in these rock layers allows the wells to flow freely “I hooked up the artesian well to underground pipes that run to all the locations where the sculptures are at. I hooked them to PVC pipes that go up in the air and I’ve got holes drilled in those at random, so you never know what they’re going to look like.”

The naturally flowing artesian well feeds the pipes with a steady trickle of water and as the winter goes on, the sculptures begin to develop.

“I start in early December,” Nelson says. “When they start out forming, they’re more fragile than they are now with a lot more icicles. They’re kind of maxed out now and about as big as they’re going to get.”

They’re still changing shape, though, and you can see little sprays of water shooting from some of them. 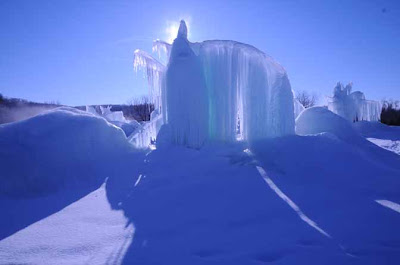 Nelson’s curious roadside attraction has drawn visitors by word of mouth and occasional media coverage. He foots the bill for the entire operation—the electric bill from the 15,000 watts it takes to light it at night is about $300 a month, and he had to replace the well last year. But he cheerfully accepts dona tions in a box at the unmarked parking area.

Watch your step as you wander around the hulking ice forms. If you go during the day, shoot for early morning or late afternoon when the sun is low. The colder it is, the better they will look, with steam rising off their tops against a brilliant blue sky. The sculptures are lit during nighttime hours.

It’s winter. It’s Minnesota. If you can’t escape it, find a way to enjoy it—even if you have to cross the Cheddar Curtain.

HOW TO GET THERE
Take I-94 into Wisconsin and exit at Hwy 35 South toward River Falls. Continue on Hwy 65 south of River Falls to Ellsworth. Turn left on U.S. 10 in Ellsworth, pass through town, and follow U.S. 10 for 8 more miles. Turn right at County A and follow the Rush River for about 3 miles. The ice sculptures will be on your left. Don’t forget to throw something in the donation box.

(Hat tip to Paulette Anderson for clueing us in on this hidden wonder.) 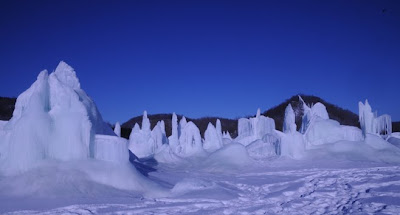