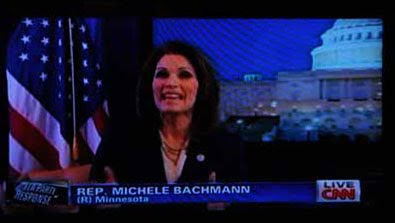 Bachmann’s deceased father-in-law still registered as agent and general partner for family farm that has provided her federal farm subsidies.
By Karl Bremer

Michele Bachmann’s family farm limited partnership in Buffalo County, WI, still lists her late father-in-law Paul Bachmann as the partnership’s registered agent and general partner with the Wisconsin Department of Financial Institutions, even though he has been deceased since May 2009. That puts the partnership in violation of Wisconsin state law, according to a spokesperson for the Department of Financial Institutions.

The Bachmann Farm Family Partnership comprises 951 acres with at least one home on 38 parcels in Independence, WI, with a total assessed value of $664,950. Michele and Marcus Bachmann are partners in the farm partnership, which was established April 12, 2001, with an ownership share valued at between $100,001 and $250,000. Its corporate records on file with the Wisconsin Department of Financial Institutions listed Paul Bachmann of Independence, WI, as the partnership’s general partner and registered agent as of Jan. 31, 2011.

It’s not known who—if anyone—besides Michele and Marcus are involved in the partnership. Wisconsin state law does not require the disclosure of anyone other than the general partner and registered agent for limited partnerships.

According to a Wisconsin Department of Financial Institutions spokesman, if a registered agent or general partner dies, the law requires that the partnership file notice with the state. That office has received no notice of a change in general partner or registered agent for the Bachmann Farm Family Limited Partnership since its initial filing in 2001, according to the spokesman. Paul Bachmann died May 20, 2009, so that would appear to put the Bachmanns in violation of the law.

However, the Department of Financial Institutions has no investigatory or enforcement powers, so it’s not clear how the Bachmanns would be brought into compliance.

BACHMANN’S FARM SUBSIDIES
Bachmann has claimed between $32,503 and $105,000 in income from the farm since 2007, according to her congressional financial disclosure forms for 2007, 2009 and 2010. She still has not reported her 2008 income from the farm on her disclosure form from that year—an apparent violation of yet another law--congressional reporting requirements.

While Farmer Bachmann has always been happy to collect federal farm subsidies on her family farm, Congresswoman Bachmann recently proposed replacing those subsidies with “farmer savings accounts.” It’s not known whether the Bachmanns, who live in a $1.27 million home on a Stillwater golf course, would open such an account.

NOT THE FIRST TIME
Michele Bachmann has sat on the House Financial Services Committee for over four years. She often touts her advanced degree in tax law, and her past as an IRS lawyer. Yet she has a long history of sloppy bookkeeping, questionable financial reporting, and ethics violations, both in the Minnesota State Senate and Congress.

Just last year, the Federal Elections Commission in a 10-page letter rapped the congresswoman’s campaign for 71 improper entries and 18 unacceptable employer or occupation entries in its 2009 end-of-year report.


If Michele Bachmann can't keep her own financial and ethical houses in order, what makes her think she's qualified to tend to the nation's?
Posted by Karl Bremer at 8:30 PM