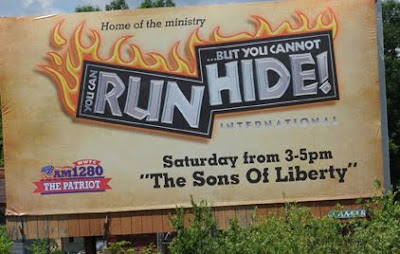 “My life’s an open book,” Bradley Dean Smith, aka "Bradlee Dean," bellowed on his anti-gay, hate-talk radio show January 15. But when it comes to having a peek at the mysterious finances and real estate deals of Smith’s Annandale “ministry,” You Can Run But You Cannot Hide International (YCR), Smith will go to extraordinary means to slam that open book shut.

Since Ripple in Stillwater began its investigation of Smith’s YCR nonprofit, along with its sister nonprofit Old Paths Ministry Inc., Dean has had YCR’s treasurer register a complaint with the Washington County Sheriff’s Office regarding my articles, and had one of his lawyers send a three-page letter to the parent company of Minnesota Independent complaining about coverage of his organizations by “some reporters.” The letter is on the YCR website.

H. Douglas Duncan, a Lodi, CA-based lawyer who prepared YCR’s 2009 federal tax returns, claims in his missive to the American Independent News Network that reporters “have engaged in baseless innuendo and supposition” in writing about YCR. “Further, they have drawn unfounded conclusions which imply that investigations and criminal proceedings were both pending and warranted. Neither is the case.”

In a series of articles, Ripple in Stillwater examined the sham ministry trusts under which Smith had his two organizations organized by Glen Stoll of Edmonds, WA, in 2005, as well as the curious Wright County real estate transfers between Smith, Old Paths Church, Old Paths Church Ministries, and Smith’s connections to the Oregon based anti-tax religious cult, Embassy of Heaven.

Bradley Dean Smith declined to comment for those articles.

Duncan defended the use of trusts as “a valid tool utilized by individuals, for profit and not-for-profit organizations,” he wrote. With regard to the sham trusts set up for Smith by Stoll, he claimed that “although the trust structure was legally valid, You Can Run But You Cannot Hide International independently determined that the trusts were not in the best interest of the organization, nor were they in the best interest of the organization’s nonprofit purpose.

What Duncan fails to address is why it took Smith and YCR Secretary Jacob MacAulay more than three years to take legal action to get out of Stoll’s sham ministry trusts. Stoll had been under a permanent federal injunction prohibiting him from promoting or selling his trusts since June 2005—the same time as when he and Smith were doing business.

Stoll ignored the injunction order. The Justice Department sought to have him jailed for contempt in June 2006. Stoll remains in contempt of the 2005 injunction order with at least $50,000 in fines hanging over his head.

Oddly enough, Duncan comments in a footnote to his letter that “You Can Run But You Cannot Hide International should be applauded for exposing this type of fraud and misrepresentation. Many other nonprofit organizations, previously defrauded by this scheme, now have a pattern and a court ruling upon which they can rely to assist them in reclaiming full control of the assets of their organization.” He goes on to liken Smith and MacAulay to unfortunate victims of a Ponzi scheme of which they had no knowledge.

In his letter, Duncan also defended the salaries of YCR board members and employees, noting that they are “determined by an independent compensation committee in full compliance with” tax laws.

In an obvious attempt to discourage further reporting on his clients, Duncan concludes: “From this point forward any reports stating information contrary to the facts stated above are baseless, inaccurate and will have been published with the full knowledge that the reports are false.” He then signs off “In support of a free (accurate and unbiased) press.”


SMITH RESORTS TO SHERIFF’S COMPLAINT
Smith took his book-closing one step further when he had YCR’s treasurer, Heather MacAulay of Annandale—Jacob MacAulay’s wife—register a complaint with the Washington County Sheriff’s Office about information she claimed had appeared on Ripple in Stillwater.

The sheriff’s report said MacAulay was “concerned” that information such as “where they live, what they earn, along with other information,” had appeared on Ripple in Stillwater.

Inexplicably, the report further stated that “Heather said the same information is blogged about Michele Bachmann. Heather said she is uncomfortable with this and that it is uncalled for.”

However, as treasurer for YCR, MacAulay should well know that salary information and addresses of a nonprofit’s property and offices are all a matter of public record. They can be found in public property tax records, IRS Form 990s, the Attorney General’s Office and the Secretary of State’s office. In fact, the MacAulay's home address is listed as the registered corporate office for You Can Run But You Cannot Hide International, Inc. in its Articles of Incorporation on file with the Secretary of State's office.

For the record, nothing has appeared on Ripple in Stillwater that can’t be found in public records—and most of it is online. 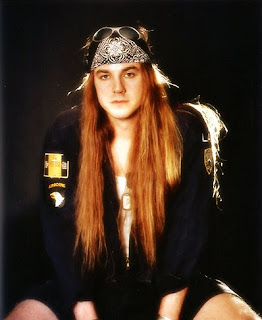 Bradley Dean Smith was given the opportunity to respond to a whole series of questions about his “ministry” and relationships with anti-tax organizations such as Glen Stoll’s and the Oregon-based Embassy of Heaven. He chose not to.

I'm happy that Smith has finally responded—sort of—through his attorney, to some of my questions. But he really should disabuse himself of the notion that sending his underlings to whine to the cops about public information being disseminated about his controversial little “ministry” is going to stop anyone from looking further into his affairs.

That’s really not “in support of a free press,” as his lawyer
would say. Or much of an “open book,” as Bradley Dean Smith would say.