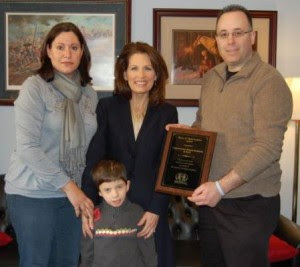 Once again, Congresswoman Michele Bachmann has been honored for supporting something that she has repeatedly voted against.

The Minnesota 6th District Republican was recognized recently as one of the Pediatric Hydrocephalus Foundation’s “Heroes of Hydrocephalus” for her sponsorship of H.Res. 373 in 2009 designating September “National Hydrocephalus Awareness Month.”

It’s a curious honor, though, since Bachmann has voted against federal funding for hydrocephalus research at every opportunity since she was elected to Congress in 2006.

Hydrocephalus is a condition in which excessive cerebrospinal fluid — a clear fluid surrounding the brain and spinal cord — accumulates to cause an abnormal dilation of the spaces in the brain called ventricles. This dilation causes potentially harmful pressure on the tissues of the brain. The disease may be congenital or acquired, and occurs in about 1 in 500 births.

“What Congresswoman Bachmann and Congressman Lance have done for the Hydrocephalus Community cannot be overstated. In just under 2 years, we saw September named as ‘National Hydrocephalus Awareness Month,’ and just this past month, a Congressional Caucus to educate and raise awareness about Hydrocephalus was created,” said Michael Illions, PHF’s National Director of Advocacy.

Not so fast, Mr. Illions. Let’s take a closer look at what Congresswoman Bachmann has done for hydrocephalus research.

Federal funding for hydrocephalus research comes through the Department of Health & Human Services (HHS). The National Institute of Neurological Disorders and Stroke (NINDS) is part of the National Institutes of Health in HHS and is the leading federal agency conducting and funding hydrocephalus research. Some research also may be conducted by the Centers for Disease Control and Prevention, also under HHS.

Bachmann's own 2009 resolution stated that "further research into the epidemiology, pathophysiology, disease burden, and improved treatment of hydrocephalus should be conducted and supported” and that “public awareness, professional education, and scientific research regarding hydrocephalus should increase through partnerships between the Federal Government, health care professionals, and patient advocacy groups.”

"It is my hope that by raising awareness of hydrocephalus, we can encourage the research that will lead to new diagnoses, treatments, and cures for it, helping these children and their families live full lives without constantly fearing the worst," Bachmann wrote on her website.

Yet since 2007, Bachmann has voted against every HHS appropriations bill that funds the very research she claims to support. She cast “no” votes on final passage of HHS appropriations for FY2007, FY2008, FY2009, FY2010 and, most recently, on December 17, 2010, for a continuing appropriations resolution for FY2011.

“It is truly humbling to receive the ‘Heroes of Hydrocephalus’ Award, but I believe the real heroes are those with hydrocephalus, their families, and all advocates who work tirelessly everyday to bring awareness to this condition. I’m glad I could play a small role in the cause by sponsoring a House Resolution designating September as ‘National Hydrocephalus Awareness Month’,” said Congresswoman Bachmann.

Yes, a resolution is a small role, Congresswoman Bachmann—a very small role. But it could have been much larger. You could have joined another group of heroes you failed to mention: the members of Congress who actually vote their convictions for such causes and back them up with real dollars, instead of just mouthing them for cheap publicity stunts before moving on to the next camera.
UPDATE:
Ironically, the newly formed Pediatric and Adult Hydrocephalus Congressional Caucus will be co-chaired by Minnesota Congressman Tim Walz (D-1). Walz got no award but, unlike his headline-grabbing colleague, he has consistently voted "yea" on federal funding for hydrocephalus research.
UPDATE 2:
See February 7 update here.
Photo: Pediatric Hydrocephalus Foundtaion
Posted by Karl Bremer at 6:33 AM