When John Edwards was busted for paying $400 for haircuts out of his presidential campaign funds, the media and Republicans had a field day.

But Michele Bachmann wasn’t even running for president—yet—when she coughed up $225 for “Makeup/Hair Design” on November 8, nearly a week after Election Day 2010. That was the day Bachmann made her grand announcement that she was running for the Republican House Conference chairman position.

Bachmann’s post-general-election Federal Election Commission filing shows a November 8, 2010 payment of $225 for “Makeup/Hair Design” to a Woodbury address. The receipt was for the services of profes 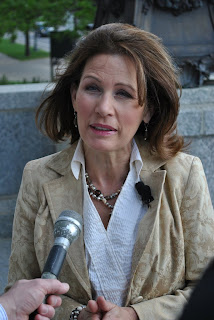 sional makeup artist Natalie Hale, according to her father-in-law, Terry Trooien. "She is specifically requested by Michele Bachmann when she comes back to Minnesota," says Trooien. "She goes around with her on the bus. Haven't you noticed how much better she looks when she's back here than when she's in Washington?" he notes with pride.

Bachmann's D.C. makeup job was lampooned on Saturday Night Live recently for her horrific look in her Tea Party State of the Union response from Washington. SNL comic Kristen Wiig, playing Bachmann, informed viewers that her makeup for the speech was done by a 5-year-old child (see clip below).

Trooien says his daughter-in-law is nonpartisan in her work. She also did makeup for Bachmann's opponent in the last election, Tarryl Clark.

Bachmann, who once famously confessed that her husband, Marcus, sometimes picks out her dresses, has always presented herself as anything but a fashion diva. When she showed up at her State Senate district convention in her first run for office in 2000, she claimed that “I had on jeans and a sweatshirt with a hole in it and tennis shoes.”

Bachmann’s $225 makeup and hair design job worked out about as well for her House GOP leadership candidacy as Edwards’ pricy tonsorial appointments did for his. Two days after her expensive primping for the cameras, she threw in the makeup towel after House Republicans backed her opponent Texan Jeb Hensarling in droves.

Bottom image: Bachmann in Washington, away from the services of professional makeup artist Natalie Hale.
Posted by Karl Bremer at 7:39 AM