Congresswoman Michele Bachmann finds her way back to her district 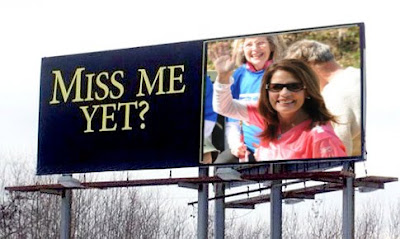 Congresswoman Michele Bachmann is scheduled to breeze through the district she purportedly represents on Friday, March 18, to pimp for the billion-dollar Bachmann Boondoggle freeway bridge across the St. Croix River. Bachmann will be meeting with Gov. Mark Dayton and Stillwater Mayor Ken Harycki in downtown Stillwater at 12:15 p.m. for a 45-minute tour of the historic lift bridge that crosses the river at Chestnut Street.
Bachmann and her cohorts have been spreading misinformation about the proposed four-lane, 65-mph bridge, and often can't even get their stories straight. But that may be catching up with them.
Bachmann has accused "radical environmental groups" of distorting what her legislation to circumvent the Wild and Scenic Rivers Act, the courts and the National Park Service would do. She insists that it doesn't exempt the new bridge from the Act at all.
But Harycki, the bridge's biggest local cheerleader, on March 14 argued that nothing can be done about building a bridge without an exemption from the Wild and Scenic Rivers Act. He also claimed that traffic on the I-94 bridge would be "gridlocked to St. Paul" without a new bridge at Stillwater.
However, Harycki's hyperbole failed to convince the Stillwater City Council to pass a resolution supporting Bachmann's legislation. It was tabled until the next meeting.
Posted by Karl Bremer at 7:07 AM