Let's take a little 'lift' out of the Stillwater Lift Bridge 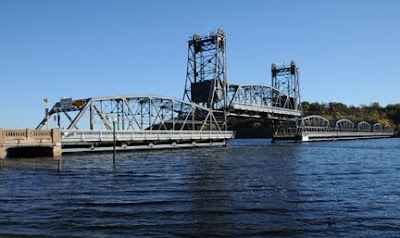 U.S. Coast Guard could change lift bridge frequency. All MnDOT has to do is ask them.
By Karl Bremer

If there’s one thing upon which all sides on the Stillwater bridge controversy agree, it’s that raising the historic lift bridge is the primary cause of traffic tie-ups in downtown Stillwater. Yet everyone has been so focused on doing an end-run of the Wild & Scenic Rivers Act with a four-lane freeway bridge across the river that the simplest of solutions—reducing the absurd frequency of the lifts on the Stillwater bridge—has not even been considered in at least a decade.

Any changes in the lift bridge schedule “precede my time,” says Stillwater Mayor Ken Harycki, who has been in office since 2007. “I think it was during Jay Kimble’s time as mayor (1994-2006). My recollection is that the Coast Guard said we couldn’t adjust the lift bridge schedule, and a compromise was reached where they said it can’t be lifted during the peak rush hour period.”

The current schedule calls for lifts every hour or half-hour from May 15-October 15, with less-frequent lifts between 2:30 p.m. and 5:30 p.m. on weekdays and late at night.

Minnesota Department of Transportation (MnDOT) spokesperson Beth Petrowske couldn’t say for sure when the lift bridge schedule was last looked at either.

“I do not know the last time the schedule was modified, but is has been several years,” Petrowske wrote in an email. “The Coast Guard would go through an extensive public participation process before modifying the lift schedule.”

Spokespersons for environmental groups who have been heavily involved in the Stillwater bridge issue over the years could not ever recall public hearings being held about changing the lift bridge schedule—despite its role as a primary traffic snafu.

Even spokespersons for the U.S. Coast Guard, which has jurisdiction over the St. Croix River from Prescott to Taylor’s Falls as a navigable waterway, cannot recall when the subject was last revisited.

“Not anytime in the last few years,” says Eric Washburn, administrator of the U.S. Coast Guard Eighth District Western Rivers Bridge Branch in St. Louis. His office oversees more than 1,800 bridges in 22 states, including the Stillwater lift bridge.
BRIDGE REGULATIONS CHANGED 'ALL THE TIME'
“We do regulation changes on bridges all the time,” says Washburn. “There is a federal process. If MnDOT came to us and said they wanted to change the operation of it—they’re the bridge owner—we would have to look at it.”

The Coast Guard would issue a 60-day “Notice of Proposed Rulemaking” during which time comments could be submitted and a public hearing scheduled in Stillwater to take testimony.

“We would make some preliminary contacts with the Stillwater area—city officials, marina operators, commercial boat operators—to get the general feel for how big a hearing would be required,” Washburn explains. “The final rule doesn’t take very long. We prefer to issue them within 30 days.”

Washburn says lift- and draw-bridge regulations are “all over the place” depending on their location. In Joliet, IL, for example, five drawbridges in a row on a heavily traveled highway are prohibited from opening during high-traffic periods. Elsewhere, on rivers with little boat traffic, bridges are required to open on demand only with 24 hours notice. In Arkansas, Washburn says, one bridge was recently converted from scheduled lifts to remote operation as needed.

“We certainly change regulations due to changing conditions,” Washburn concludes. “Traffic patterns are different for both boaters and land transportation over the years.”

“The operation of the Lift Bridge creates a 10-minute closing of the bridge to accommodate larger vessels/boats using the river,” the EIS states. “The bridge deck lift causes substantial level of service problems which causes traffic queues, backups, and local traffic diversions.”

It also causes delayed emergency response due to congestion preventing emergency vehicles from crossing, the EIS notes. “The Lift Bridge currently operates under congested conditions for about 3 hours per day.” 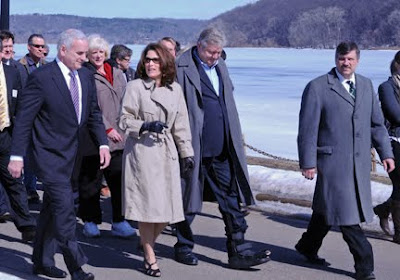 While this relatively painless solution to reducing Stillwater’s traffic problems continues to be ignored, Gov. Mark Dayton and U.S. Sen. Amy Klobuchar have joined Rep. Michele Bachmann in seeking to exempt the proposed four-lane freeway bridge over the St. Croix from the National Wild & Scenic Rivers Act. Their actions have infuriated former Vice President Walter Mondale, who as a U.S. senator from Minnesota co-authored the National Wild & Scenic Rivers Act in 1968.

“I think that people ought to be soberly thinking about whether they want to assault the uniqueness and majesty of that river,” Mondale says. “This is establishing a dangerous precedent of the whole river system.”

Klobuchar has followed Bachmann’s footsteps in disingenuously describing her attempt to exempt the bridge from the Wild & Scenic Rivers Act.

“The law, however, provides for an exemption,” she told Minnesota Public Radio. “It's rarely used, but I'm going to be introducing legislation that uses that exemption, and it ... sets the bar high and it says that if you can pass an exemption through Congress and it's approved by the Secretary of Transportation, that you can get an exemption for certain circumstances.”

What Klobuchar didn’t tell MPR is that only two exemptions have ever been granted for projects on rivers protected by the Act, and neither of them were related to transportation. Both were for fisheries habitat improvement projects that improved the ecology of the rivers and were miniscule in scale compared with the $700 million freeway span Klobuchar is pushing.

Klobuchar attempts to justify adding a four-lane, 65-mph freeway bridge across a federally protected river because other eyesores already exist on the St. Croix, such as the Xcel Energy coal-fired power plant south of Stillwater.

“When you look at that, you realize that this isn't exactly a residential area or a scenic moment,” Klobuchar told MPR. Evidently, no one told Klobuchar about the 60 Oak Park Heights homes that already were bought out and destroyed in the 1990s to make room for her and Bachmann’s bridge.

Klobuchar also ignores Mondale’s concern that allowing such a bridge to be exempted from the Act on the St. Croix would set a “dangerous precedent” for similar exemptions on other protected rivers.

If the U.S. Coast Guard is ready and willing to hold public hearings on changing the lift bridge schedule—a move that could have immediate impact on Stillwater’s traffic problems—why hasn’t MnDOT asked them to do that? No one seems to know.

Stillwater Mayor Harycki sounded surprised that it was only a matter of asking the Coast Guard to change the regulation and they would take the matter up. He agreed that it would be worth trying and that MnDOT, as the owner of the bridge, would be the appropriate authority to make that request.

With the imprimatur of the river’s boating interests—recreational and commercial—the Coast Guard’s Washburn says they would “strongly consider” changes to the lift bridge schedule to alleviate land transportation congestion.

Isn’t that something everyone can agree on for the time being so that “all possibilities” can be “reopened for consideration” as Dayton promised in February before he did an inexplicable about-face three weeks later and announced his support for the Bachmann Boondoggle?

It’s your move, MnDOT. What are you waiting for?