Stirring the pot with James McMurtry 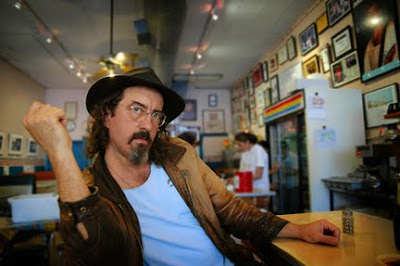 Austin singer/songwriter blazes a trail through the North Country.

James McMurtry wields words like a double-edge straight razor. He’ll take it right to the jugular if you’re on the wrong side of him--cut you once and you’ll bleed twice. Hunter S. Thompson with a guitar.

Ask George W. Bush, who’s been in fellow Texan McMurtry’s sights more than once.
“You’re the man show ‘em what you’re made of
You’re no longer Daddy’s boy
You’re the man
That they’re all afraid of
But you’re only Cheney’s toy”

McMurtry takes the former president down verse by verse in a powerful indictment of his warmongering. After that song came out, McMurtry lamented as he pulled out of a KFC somewhere in Illinois, “I got tagged as a political writer, and that’s all they wanted out of me.”

“It also got me in trouble,” he adds. “Some people though I meant the soldiers were Cheney’s toys.”

Governor George W. Bush was the unnamed subject of another haunting McMurtry song of political intrigue on the same record.

Does the Governer know who killed the fishermen
On the lake last night?


The cigarette boat is not even legal

The lake's too narrow to be goin' that fast

That cigarette boat didn't even slow down

It was throwin' up a big old rooster tail

And it ran right through 'em with a sickening sound

Does the Governor know who killed the fishermen?

--"The Governor," from Just Us Kids

Although he says “The Governor” is a fictional song, “There was a similar event to that happened when Bush was governor of Texas." The perpetrator was never found.

McMurtry’s drummer lived on Lake Austin at the time, which is just a “backed-up stretch of the Colorado River.” No place for cigarette boats. After the accident, he says, it was rumored that “the lake cops were told never to look into that.”

Muses McMurtry: “It really would be easy to hide a boat there. There’s a stretch of the river just lined with boat houses and you could just pull in there and hide it or sink it …”

WE CAN'T MAKE IT HERE

McMurtry began stirring the political pot a few years earlier. In 2004, he wrote a song called “We Can’t Make It Here,” an anthem about the loss of jobs, social injustice and corporate greed.

“I got a lot of real angry reaction. This was in 2004, when Bush’s numbers were really soaring. But it’s not specifically anti-Bush,” he says.

“I had a solo acoustic version of it so I took it down to the morning DJ at KGSR in Austin.” He spun it fresh over the air and, says McMurtry, “I had some pretty angry emails before I even got home.”

Sitting there by the left turn line

Flag on his wheelchair flapping in the breeze

One leg missing and both hands free

No one’s paying much mind to him

And now there’s more coming back from the Mideast war

That big ol’ building was the textile mill

It fed our kids and it paid our bills

But they turned us out and they closed the doors

See those pallets piled up on the loading dock

They’re just gonna sit there ‘til they rot

Empty storefronts around the square

There’s a needle in the gutter and glass everywhere


--"We Can’t Make It Here," from Childish Things

The song was a lot more popular on the East Coast and in the Northeast. “Union states where they’ve lost a lot of jobs to outsourcing,” says McMurtry. “The song showed me the power of the internet,” he adds. He put it online as a free download during the 2004 election and it surpassed any CD he had ever sold.

“We hadn’t even made the rest of the record yet,” he laughed. “This was six months before the record was released.”

Author and McMurtry fan Stephen King said it “may be the best American protest song since (Bob Dylan's) 'Masters of War.’” A lot of other folks agreed. It helped catapult Childish Things to the top of the Americana charts for six weeks and launched McMurtry’s somewhat reluctant role as a folk hero among the pissed off and politically disenfranchised.


“I don’t think anything’s changed” since Bush left office, says McMurtry. “I really don’t know who’s pulling the strings. But most of the horrible things that were going on under Bush as far as outsourcing started under Clinton anyway.”

It’s a little harder to write political songs now, says McMurtry. "Without Bush, there’s no one to focus on. And I can’t really get a handle on what Obama’s about.”

It would be selling James McMurtry short to pigeonhole him as a political protest singer. But then, that rap never seemed to hurt Dylan’s career.

Besides political and corporate scoundrels, McMurtry’s lyrical landscapes are littered with grandmas and ghosts, lost loves and lowlifes, spun out in a bourbon-smooth voice that’s as comfortable as old leather. He’s a blistering guitar player to boot, and can lock into a blue highway groove like J.J. Cale’s at the wheel.

Go see for yourself. America may not make a lot of things here any more, but we’ll always make great music. And this is some of it.

James McMurtry is appearing at Pizza Luce in Duluth Thursday, March 31, and Friday, April 1, at the 400 Bar in Minneapolis. He’s co-headlining with the Bottle Rockets, who open both shows.