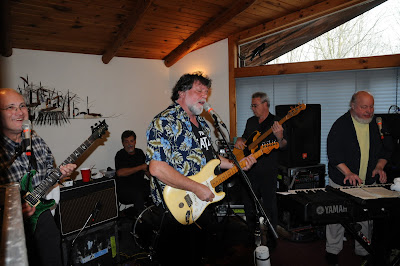 Riverview Supper Club. Union Bar. Payne Reliever. Moby Dick’s. Mr. Nib’s. The original Wilebski’s Blues Saloon. The original Guthrie Theatre. Glam Slam. The Quest. Trocadero’s. The names come calling back like some lost radio. They’re gone now, ghosts along the Mississippi, but the Radiators played them all—and many, many more—in the 29 or so years they’ve been plying their Fishhead music in Minnesota waters.

Now, after a long-playing 33-1/3 years, the New Orleans Radiators are calling it a career. Keyboardist and prolific songwriter Ed “Zeke Fishhead” Volker announced his departure from the Rads late last year, and the band has been playing to packed and tearful houses ever since. Their last Minnesota shows are tonight, Friday and Saturday at the Cabooze, the venerable West Bank institution that is the longest-standing club in the Radiators’ storied Minnesota history.

The close-knit Radiators Fishhead family was spawned chiefly from two sources: students of Tulane University and other New Orleans schools who moved back home after graduating to spread their New Orleans groove through bootleg tape-trading circles; and the taper-friendly Deadhead community of the Grateful Dead, which immediately latched onto the jam-based Radiators vibe.

As the tapes spread, so did the fans, and when the band started to hit the road, they found a ready-made audience waiting for them in the most unlikely places.

One of those places was Minneapolis, on the other end of the Mighty Mississippi from the Crescent City. A confluence of like-minded souls eventually found each other in the mid-1980s and formed the Krewe of DADs (Druids, Alchemists & Dervishes), which became the first away-from-New-Orleans Krewe to coalesce around the Radiators. More would follow—San Francisco, Florida, Colorado, Philly, Chicago, SoCal—all loosely based on New Orleans’ notorious Krewe of MOMs (Mystic Orphans & Misfits).

Little did we know that this would be the start of a decades-long relationship with a band that would become the soundtrack of our lives as it created bonds among fans that would last a lifetime. The Radiators have seen us through fires and floods, cancer and catastrophes. We’ve seen them through hurricanes and high water, stolen equipment trucks and stolen hearts. We’ve shared pain and joy, life and death, misery and happiness, but most of all, the music.

The Krewe of DADs did whatever it took to make the music happen. We put them in cornfields, coulees, clubhouses and churches, every hotel ballroom or roadhouse that would have us—even our living rooms, barns and backyards. And when we couldn’t get enough of them at home, we traveled to see them.

The Radiators were our gateway drug to New Orleans. They not only provided us the roadmap to the musical mecca of New Orleans, they were an integral part of it. Professor Longhair, Earl King, James Booker? Name-check all of ‘em on these cats’ resumes′.

Extended weekend forays to see the Radiators in their hometown in the ‘80s led to more than two decades of Jazz Fests and countless trips to Frenchmen Street, Tipitina’s and points beyond to see the band. We rang in the Millennium with the Radiators on New Orleans’ West Bank of the Mississippi, and raged at MOMs Balls from Arabi to Algiers.
We followed them from the San Francisco Bay to the Red Rocks of Colorado, from the rolling Mississippi to the shores of Lake Pontchartrain. Twice we sailed the High Seas with the Radiators as our musical skippers, zig-zagging across the Caribbean from the Dominican Republic to Guatemala and tropic isles in between.

Along the way, we’ve made friends for life from all corners of the country. Like a sweet magnolia tree, every year, more branches were added to the trunk, and more blossoms added to the branches. That magnolia would shade St. Charles Avenue now.

So the boys wit’ da noise are gonna haul it on up Highway 61 to grease our skillet one last time, and then we’re gonna close that old speakeasy down. Fishheads from a dozen or more states will be flying in for what promises to be an epic six sets of music with no song repeated. This is a band that’s going out at the top of their game. Their sold-out four-night run at San Francisco’s Great American Music Hall last month left fans wondering how can they stop now? Their star-studded closeout of the New Orleans Jazz & Heritage Fest last Sunday was the talk of the Fest.

When the last dog is hung Saturday night at the Cabooze, grown men will cry and fine ladies will weep. Heads will shake, and then we’ll look at each other and ask what’s next.

This long, twisted road isn’t coming to a dead end, but rather, a fork. After all, New Orleans musicians—and their devotees—never really retire, they just shift gears, change lanes and keep moving.

Radiators bassist Reggie Scanlan’s side project the New Orleans Suspects is gearing up to hit the road after the Rads’ Last Watusi three-night run at Tipitina’s in New Orleans June 9-11 (sorry, those sold out in about 20 minutes). Keyboardist Volker plans to hang around New Orleans and get back to playing piano. Guitarist Camile Baudoin will have an acoustic CD out with friends in June, and guitarist Dave Malone may do some work with his brother Tommy. It’s possible a “Radiators 2.0” could emerge with a new keyboard player, but that’s nothing more than wishful speculation at this point.

As the page turns, we’ll be there. But in the meantime, to Camile Baudoin, Frank Bua, Dave Malone, Reggie Scanlan, Ed Volker, and krewe members Kenny Samuels, Josh Abelson and Phil Frank, thanks for the memories. Our lives would be much less richer without you. The community and music you leave behind will last forever. And while it may be time to change the record, it’s still not time to stop dancing.
Photo: The Radiators in our living room, Easter Sunday, April 2009. 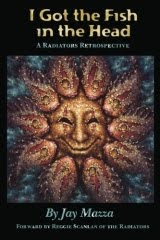 I Got the Fish In the Head:
A Radiators Retrospective by Jay Mazza

If you want to hear the Radiators' story from someone who was there from the beginning, pick up my pal Jay Mazza's new book on the Rads. It's a great tale through the eyes of one of New Orleans premier music writers, with a fine cover illustration by New Orleans artist and friend Mike Williamson. Find it here.
Posted by Karl Bremer at 8:32 AM