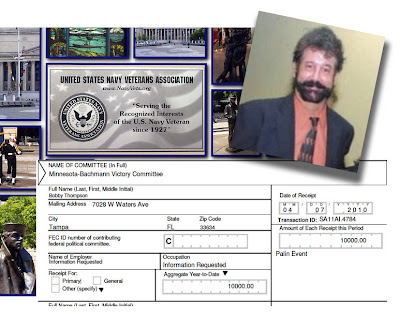 The Minnesota Chapter of the Society of Professional Journalists has informed me that I won a Page One Award for “Best Use of Public Records” for my series on “Minnesota and the Man Known as ‘Bobby Thompson.’” They won’t reveal whether it was 1st, 2nd or 3rd place until the annual awards banquet June 7.

This is the first year for the MN SPJ’s “Best Use of Public Records” category. Unlike other award categories, this one is open to all media of any size and only three awards are given.

The exclusive multipart “Minnesota and the Man Known as ‘Bobby Thompson’” series began on DumpBachmann.com and continued on Ripple In Stillwater. It detailed the Minnesota operations and Republican political connections of an allegedly fraudulent charitable organization called the U.S. Navy Veterans Association. The group was led by a man known as "Bobby Thompson" who, the Ohio attorney general’s office has charged, stole that identity. It raised more than $1.5 million in Minnesota over a six-year period but did little apparent charitable work.

Ohio has issued a nationwide warrant for “Thompson,” who has been on the lam since the St. Petersburg Times newspaper began investigating him in 2009. He’s been charged with identity fraud, corruption, money laundering and theft. He and the Navy Vets group are under investigation by several other states’ attorneys general, including Minnesota, as well as the IRS and Veterans Administration.

“Thompson” gave tens of thousands of dollars to Minnesota Republican candidates and party units, including $21,500 to former Sen. Norm Coleman. Two of his last known political contributions anywhere were $10,000 to a Michele Bachmann fundraiser featuring Sarah Palin and $5,000 to a GOP-leaning Minnesota political action committee called Patriot PAC, both in April 2010.

The Minnesota Campaign Finance and Disclosure Board is investigating political contributions made by “Thompson” under that name and another phony name he’s suspected of using.

Graphic by Ken Avidor
Posted by Karl Bremer at 9:41 PM