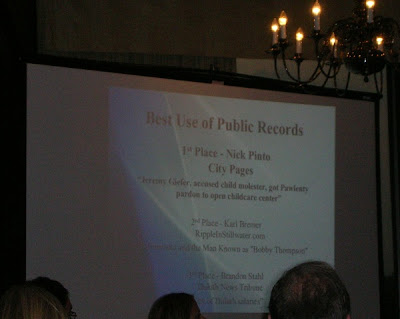 
RippleInStillwater.com author Karl Bremer won Second Place for “Best Use of Public Records” in the Minnesota Society of Professional Journalists 2011 Page One Awards tonight. It was the first year for the special category, and Bremer won competing against professional journalists in all circulations and sizes of print, broadcast and online media. He was the only independent journalist to win an SPJ award this year.

The award was for Bremer’s lengthy investigative series on “Minnesota and the Man Known as Bobby Thompson” that was published on the DumpBachmann.com blog and RippleInStillwater.com. The series, which detailed the Minnesota operations of an allegedly fraudulent charitable veterans organizations run by “Thompson,” was largely ignored by the mainstream media.

However, the series so far has prompted a months-long investigation by the Minnesota Campaign Finance and Disclosure Board, which last week fined “Thompson” $21,000 for illegal campaign contributions to Minnesota Republicans and GOP-connected political committees. It’s not likely they will ever collect it, since “Thompson” is on the lam and wanted on nationwide warrants by several states for identity theft, fraud and other charges.

Ironically, Bremer’s story on “Bobby Thompson” was rejected by several major Twin Cities media outlets. It was the first post on RippleInStillwater.com. The series continues to examine the disposition of thousands of dollars in suspected fraudulent political contributions made by “Thompson” to Minnesota Republicans.