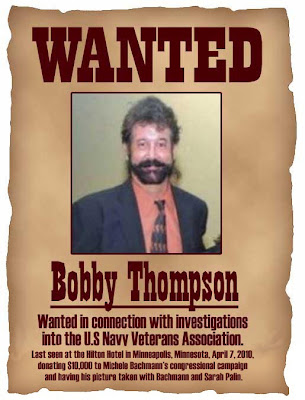 Republican recipients of Bobby Thompson's 'dirty money' are happy to keep it.


By Karl Bremer
The Minnesota Campaign Finance and Public Disclosure Board (CFB) this week fined the man representing himself as “Bobby Thompson” $21,000 for making seven campaign contributions with a false identity in an attempt to circumvent state campaign finance laws.

Now they just have to find him.

The contributions were made under the name “Bobby Thompson” and “Maria D’Annuzio” to the Minnesota House Republican Campaign Committee (HRCC), the Republican-leaning Patriot PAC run by GOP political operative Joey Gerdin, the Seifert for Governor Committee, and Citizens for David Carlson Committee, 67B, another GOP candidate committee.

The fines were the result of an investigation into a complaint filed by myself with the CFB in July 2010 that alleged illegal campaign contributions by “Thompson.” “Thompson” was the subject of my award-winning investigative series that appeared on RippleInStillwater.com and DumpBachmann.com.

The series, largely ignored by the mainstream media, began with the revelation of “Thompson’s” $10,000 donation to Congresswoman Michele Bachmann’s fundraiser in April 2010. “Thompson” had donated tens of thousands of dollars more to Minnesota candidates and party units—all Republican—over several years before going on the lam in the wake of investigations by the St. Petersburg Times and attorneys general in several states.

“Thompson’s” suspected phony charity, the U.S. Navy Veterans Association (USNVA), collected over $1.5 million in Minnesota alone over a six-year period from 2003-2009. Nationwide, it’s suspected of hauling in tens of millions more. Money collected under the guise of the USNVA allegedly was funneled to Republican campaigns across the country.

The Minnesota Attorney General’s Office has shown little interest in pursuing “Thompson” and his organization, nor in joining other states’ attorneys general in tracking down the alleged fraudster. Attorney General Spokesman Ben Wogsland did not respond to a request for an update on that office’s investigation, if any, into “Thompson” and the Navy Vets group.

CFB RETRACES RIPPLE IN STILLWATER INVESTIGATIONThe CFB conducted an extensive investigation of its own and confirmed what my series already had revealed about “Bobby Thompson” and the U.S. Navy Veterans Association: that “Thompson” allegedly ran a sham organization in Minnesota that collected over $1.5 million from unsuspecting Minnesotans using nothing more than a UPS drop box and a forwarded telephone recording for an office.

The CFB subpoenaed records for the USNVA’s UPS box and phone records from Qwest Communications, and procured documents from the State of Ohio courts, Attorney General’s Office, and Minnesota campaign committees that received donations from “Thompson.”

Diane Johnson,, treasurer for the Seifert for Governor Committee, provided the CFB with a copy of a $500 money order and a handwritten note on USNVA letterhead that came with it. The note read “Marty: With my compliments, Bobby.” However, the name on the money order was “Maria D’Annuzio,” a name that the CFB determined was also fake and used by “Bobby Thompson” to circumvent campaign finance laws.

Johnson also provided the CFB with a copy of a $500 check to the Seifert for Governor Committee drawn on the personal account of “Bobby Thompson” located in Florida. There is an individual limit of $500 in aggregate donations to candidates for governor in nonelection years.

The CFB found that the two $500 donations made to the Seifert for Governor Committee under the names of “Bobby Thompson” and “Maria D’Annuzio” likely came from the same source and thus exceeded donation limits; they also violated Minnesota statutes prohibiting such donations to be delivered (bundled) together. However, it accepted Johnson’s explanation that the campaign assumed the two were spouses and thus the bundled donations legitimate, so it did not levy a penalty for the violation.

Among the items used to secure the USNVA’s St. Paul UPS box was a business card for “Bobby Thompson” bearing a photo and Social Security number. The Social Security number led to a Bobby Thompson in Bellingham, WA—the same Bobby Thompson the State of Ohio found whose identity had been stolen by the USNVA’s “Bobby Thompson.” The Ohio Attorney General’s Office has issued a nationwide arrest warrant for “Thompson” for identity fraud. “Thompson” also is wanted on a warrant for his arrest on an Ohio grand jury indictment for money laundering and aggravated theft,

The Ohio Attorney General has charged that donations to the USNVA found their way into political contributions. However, the CFB noted that “While other investigators have concluded that the individual known as Bobby Thompson misappropriated funds from the U.S. Navy Veterans Association, the scope of the Board’s investigation did not include determining the source of the funds used for the donations to Minnesota committees.”


WHAT ABOUT THE 'DIRTY MONEY?'
The CFB did address the disposition of campaign contributions received from “Bobby Thompson.”

“The Board recognizes that, with the benefit of this and other investigations, some committees that accepted contributions from the individual claiming to be Bobby Thompson may find it inconsistent with their policies or philosophy to retain those contributions,” it wrote. It noted that Minnesota statutes limit campaigns’ charitable contributions to $100 per charity per year.

Campaign committees also may make unlimited donations to the state’s general fund to salve their conscience for accepting “dirty money.”

A central figure in the “Bobby Thompson” money story is Joey Gerdin, who was HRCC finance director in 2008 when “Thompson” made his initial $5,000 donation to the committee. Gerdin is also founder and chair of the GOP-leaning Patriot PAC, which received a $5,000 donation from “Thompson” last year—the largest single donation her PAC received besides her own contributions.

Gerdin met “Thompson” at the 2008 Republican National Convention in St. Paul and told Ripple in Stillwater last year: “I would just call anyone and everyone. I honestly don’t even remember if I cold-called him or he cold-called me. He was coming in for the RNC (Republican National Convention), and I was having a fundraiser downtown with the House caucus.”

“He seemed like a nice guy, completely congenial, supportive of veterans. Seemed like your typical patriot to me.”

Gerdin wasn’t interested in talking about “Thompson” today, however. She hung up the telephone without responding to my request for comment on the CFB findings or the disposition of the $5,000 in allegedly fraudulent campaign contributions her PAC took from “Thompson” last year.

Minnesota Speaker of the House Kurt Zellers, chair of the HRCC, and Jenifer Loon, HRCC treasurer, did not respond to telephone and email requests for comment on the CFB findings or the disposition of the $7,000 in allegedly fraudulent campaign contributions “Thompson” made to the HRCC.

The CFB’s investigation did not include contributions to the Republican Party of Minnesota through federal political action committees. However, the state GOP received a total of $10,400 from “Bobby Thompson” through committees run by Michele Bachmann’s and Norm Coleman’s campaigns.

Deputy Minnesota GOP Chair Michael Brodkorb did not respond to telephone and email requests for comment on the CFB findings or the disposition of the $10,400 in allegedly fraudulent campaign contributions from “Thompson” to the Republican Party of Minnesota.

NO HELP FROM THE A.G.
It’s not likely any of the duped donors to the U.S. Navy Veterans Association Minnesota Chapter will ever recover their money, particularly if the Attorney General fails to investigate them.

The CFB findings ordered the CFB Executive Director to “monitor other states’ efforts to locate the individual using the name “Bobby Thompson” to make political contributions in Minnesota.” If he’s located, the CFB Director is to work with the Attorney General to try to collect the $21,000 in penalties levied.

Meanwhile, the Minnesota Attorney General’s Office has refused repeated requests for information about its own investigation—if any—into “Bobby Thompson” and the whereabouts of the $1.5 million he collected from Minnesotans under the guise of a charitable veterans organization. And Republican recipients of “Thompson’s” largess no longer seem interested in talking about him or his money either.

Besides Michele Bachmann, one other Republican candidate for president can be found on "Bobby Thompson's" contribution list: former Massachusetts Gov. Mitt Romney.