New indictment alleges Bachmann's friend and donor was in Petters Ponzi from 2001-2008, same years he sought a presidential pardon 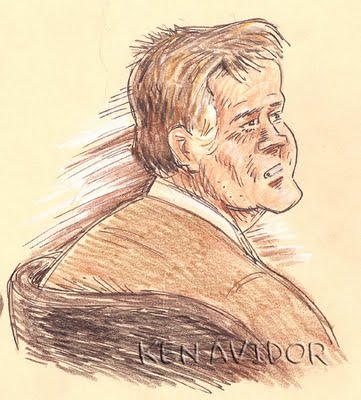 
The Justice Department filed a superseding indictment against Frank Elroy Vennes Jr. in U.S. District Court in July 19 that brings to 24 the number of fraud, money laundering and false-statement charges the politically connected former felon now faces. The charges, which include the four counts of fraud and one count of money laundering in the indictment filed against Vennes April 20, are connected to Vennes’ alleged involvement in the $3.5-billion Tom Petters Ponzi scheme.
The superseding indictment also charges James Nathan Fry of , with nine counts of fraud and three counts of making a false statement to the U.S. Securities and Exchange Commission during the Petters investigation.
A PARDON AND A PONZI

Vennes’ effort to secure a presidential pardon for federal money laundering and other crimes from the 1980s, along with his deep financial and personal connections to politicians, was the subject of a recent Ripple in Stillwater investigation. Vennes’ political friends include presidential candidates Congresswoman Michele Bachmann, presidential candidate and former Minnesota governor Tim Pawlenty, former U.S. Senator Norm Coleman, former state GOP Chair Ron Eibensteiner, former Vice President Walter Mondale, and former State Sen. Ted Mondale, among others.
The indictment alleges that Vennes’ and Fry’s criminal fraud activity in the Petters Ponzi began in 2001 and continued until September 2008, when his and Petters’ homes were raided by federal agents. During that entire time, Vennes was vigorously trying to wipe his past criminal record clean with a pardon and soliciting letters of recommendation for a pardon from politicians to whom he and his family and lawyer were donating tens of thousands of dollars in campaign contributions.
Like Vennes, Fry has contributed heavily to Republican candidates and political funds.
The Petters Ponzi scheme involved investments of billions of dollars in fraudulent Petters Corporation Inc. (PCI) promissory notes. Investors were told their funds would be used to finance “vast amounts of consumer electronics and other consumer merchandise” to be sold to big-box retailers such as Sam’s Club and CostCo.
“In reality,” the indictment states, “the transactions underlying virtually all PCI notes were fictitious. Documents evidencing the purported transactions were fabricated by Petters’ criminal associates, and the purported suppliers of the electronics goods were shell companies acting in concert with Petters. No retailers participated in the transactions underlying the PCI notes and there were no purchases and resales of consumer electronics or other consumer merchandise. Instead, Petters diverted hundreds of millions of dollars to his own purposes and paid purported profits to investors with money raised from the sale of new notes.”

“Petters’ inventory finance operation was a Ponzi scheme,” the indictment charges.
According to the indictment, Vennes began raising money from investors for PCI through his own company, Metro Gem, in 1995. From 1999 through September 2008, Vennes engaged in approximately 748 transactions involving hundreds of millions of dollars of money invested in PCI notes.
Between 2001 and 2008, the indictment states, Vennes made more than $80 million related to Metro Gem investments in PCI notes. That was in addition to the $60 million in commissions he raked in from the Palm Beach Funds investments in PCI.

Around 1998, the indictment states, Vennes began seeking larger sources of financing for Petters and PCI. But his previous convictions on federal money laundering, cocaine and gun trafficking charges prohibited him from obtaining institutional financing, so he began to work with others to set up hedge funds through which he could solicit institutional investments in PCI notes.

Two of those people were David William Harrold and Bruce Francis Prevost, owners and managers of Palm Beach, FL-based and offshore hedge funds, referred to as the “Palm Beach Funds.” Vennes recruited the two to raise money for Petters and PCI and, court documents state, from 2002 through September 2008, the Palm Beach Funds invested approximately $8 billion in PCI notes. The arrangement netted Harrold and Prevost more than $58 million in fees under their agreements with the Palm Beach Funds. Vennes earned more than $60 million in commissions paid by Petters and/or PCI for the Palm Beach Fund investments based on a percentage of the money he attracted.
Harrold and Prevost were indicted along with Vennes in April. They pleaded guilty to securities fraud in the scheme and reportedly are cooperating with federal authorities.
ARROWHEAD FUNDS

Vennes also collaborated with Fry, CEO of hedge fund investment advisors Arrowhead Capital Management, LLC, to raise money for Petters and PCI. From 1999-2008, according to the indictment, Arrowhead arranged the investment of more than $500 million of its investors’ funds in PCI. As of September 2008, Arrowhead funds had about $130 million invested in PCI notes. Vennes was the intermediary in almost every transaction between Arrowhead and PCI and made more than $48 million in “commissions” on the investments, according to the indictment. Fry made more than $41 million in fees from Arrowhead’s investments in PCI notes.
Both Vennes and Fry made “material misrepresentations and concealed material information about the PCI investments in order to induce investors,” the indictment charges. Also, the indictment states, Fry failed to disclose Vennes’ criminal record to institutional investors even though he knew such information was material to investors.
"By no later than August of 2008," the indictment states, “Vennes had been advised by Petters that there was fraud at PCI and that the PCI notes were “compromised;” Vennes knew that PCI had substantial problems paying more than a billion dollars of PCI Notes held by the Arrowhead Funds, the Funds and Metro Gem; Vennes knew that money invested with PCI was being used to pay existing PCI investors, rather than for financing consumer electronics tranactions; and Vennes was attempting to liquidate Metro Gem’s investments with PCI below the stated value of the notes. All of this information was material to Metro Gem investors. Vennes did not disclose it to investors.”
Vennes’ pardon petition was sitting at the White House by that time, apparently approved and ready to be signed later that year. If Vennes knew what the indictment says he knew about the Petters Ponzi at the time, he was probably more than a little anxious to get President Bush’s signature on it.
Now, instead of a pardon, Vennes faces a total of 330 years in prison on eight counts of securities fraud, two counts of mail fraud, six counts of wire fraud, three counts of money laundering, three counts of bank fraud and two counts of making false statements on credit applications.
Courtroom sketch of Frank Vennes Jr. by Ken Avidor
Posted by Karl Bremer at 12:54 AM