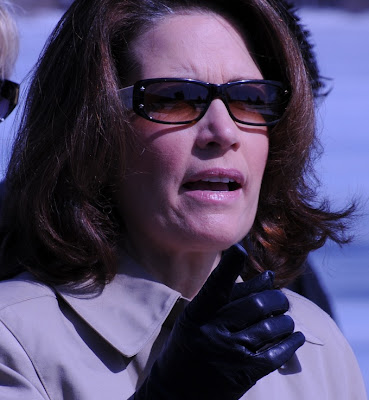 Presidential candidate appears to have registered at state for past three years under old address.


By Karl Bremer
Throughout her political career, Michele Bachmann has rarely passed up an opportunity to burnish her lawyerly credentials by claiming that she’s a “tax litigation attorney.” And for almost as long, Bachmann hasn’t even been authorized to practice law in her home state of .
Now, it appears that Bachmann’s license to practice law in Minnesota should not only be unauthorized, but suspended and placed on “not in good standing” status for failure to comply with the “Rules of the Supreme  Court on Lawyer Registration.”
Lawyers licensed to practice law in are required to register annually with the Lawyer Registration Office in the Minnesota Judicial Branch. They’re also required to pay an annual registration fee that varies depending on the lawyer’s active/inactive status, income level, residence and years in the profession.
The Supreme Court Rules also require that “Every lawyer or judge must immediately notify the Lawyer Registration Office of any change of postal address. Every lawyer or judge who elects to use the online registration system must immediately update their online registration profile to reflect any change of their postal address and email address.”
That rule is clearly referenced on the Minnesota Judicial Branch website on Updating Lawyer Registration.
Bachmann paid her most recent annual registration fee on . Her address listed on her registration is . But Bachmann hasn’t lived at that address for nearly four years.
That would appear to put Bachmann in noncompliance with the Supreme Court Rules—not just this year, but for at least the past three years.
“A lawyer or judge who fails to meet all of the criteria to be on either active or inactive status is placed on non-compliant status, and the right to practice law in this state is automatically suspended,” the Supreme Court Rules state. “A lawyer or judge on non-compliant status is not in good standing. A lawyer or judge on non-compliant status must not practice law in this state, must not hold out himself or herself as authorized to practice law, or in any manner represent that he or she is qualified or authorized to practice law while on non-compliant status. Any lawyer or judge who violates this rule is subject to all the penalties and remedies provided by law for the unauthorized practice of law in the State of .”
Did Bachmann simply ignore the rule requiring immediate notification of any change of address? Or did she knowingly continue to file under a false address since she moved from the City of to in 2008?
This is only the latest in a long history of sloppy record-keeping, tardy legal filings and questionable campaign reports that litter Bachmann’s political career. Will anyone care enough to enforce the law this time?
Posted by Karl Bremer at 8:51 PM