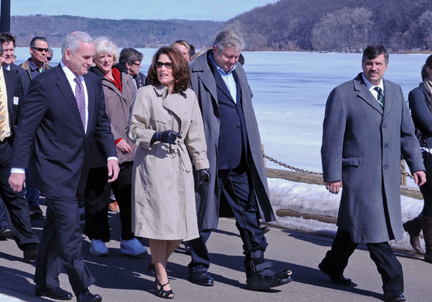 City of Stillwater paying $1,500 a month for "legislative consultant" who isn't a legally registered lobbyist. Does it pass the smell test?


Since April, the City of has been paying $1,500 a month to what appears by any definition to be a lobbyist to secure state and federal funding and approval for the and other projects. But neither the lobbyist, Mike Campbell, nor anyone else with his firm, the Conach Group, are registered with the Minnesota Campaign Finance and Public Disclosure Board (CFB).  In fact, there are no lobbyists representing the City of registered with the state at this time.
On April 19, entered into an agreement with Michael Campbell of the Conach Group in for “Legislative support for the St Croix River Crossing extension of the State Trail system, support for the New Armory Project and Phase III of the Levee Wall project.”
IF IT WALKS LIKE A DUCK
According to the contract with the City, the Conach Group is “To secure the required support of the Federal Government State of Minnesota and any administrative Department of either entity for the approval and funding of the pending St. Croix River Crossing at Stillwater” and “To secure Minnesota Legislative funding for the State purchase of the MN Zephyr Railroad Right of Way as an extension of the State Trail system, support for the New Armory Project and Phase III of the Levy Wall Project." According to the contract, “Consultant services will be rendered largely at the Consultant office and the State of .”
That sounds a lot like lobbying.
According to the CFB’s Lobbyist Handbook, “You must register as a lobbyist within five days after you … are engaged for pay or other consideration and receive more than $3,000 from all sources in any year, for the purpose of attempting to influence legislative or administrative action or the official action of a metropolitan governmental unit by communicating or urging others to communicate with public officials or local officials in a metropolitan governmental unit.”
A penalty of up to $1,000 can be assessed for failure to file lobbyist registration.
The City of has paid Campbell and his group $6,000 to date.
However, according to the novel assessment of Stillwater Mayor Ken Harycki, isn’t a lobbyist at all, but a “legislative consultant.” There is a “fine line” between lobbying and legislative consulting, Harycki told the Stillwater Gazette.
“ is a well-connected person and has helped get two bills passed at the legislature, he is getting results,” Harycki says.
That sounds an awful lot like lobbying, too.
is a former director of intergovernmental affairs for the City of , a job also once held by Michael Wilhelmi, co-chair and registered lobbyist for the Coalition for St. Croix River Crossing. was appointed to that position by Mayor Norm Coleman, He was director of governmental relations (lobbyist) for the Davis Family Holdings, and is former executive director of the Senate Republican Caucus.
According to Stillwater City Councilor Micky Cook, “advised” Harycki on his mayoral race and has “advised” other members of the council as well.
Harycki has been trying to get Campbell and his group on the city payroll since at least 2007. At Harycki’s request, according to City Council minutes, pitched the City of on a lobbying proposal in February 2007, but the City balked at taking on a new lobbyist at the start of the legislative session.
had contracted with local lobbyist Ed Cain in 2006 at a rate of $75/hour, to a maximum of $46,000 a year. Cain, who was also a lobbyist for the fraudster known as "Bobby Thompson,"  had been paid tens of thousands of dollars over the years to lobby on the city’s behalf, mostly for the bridge. However, the city appears to have gotten little for Cain’s efforts. Cain last contracted with the City of in 2008, according to CFB records.

’s 2007 proposal to the City for “State and Federal legislative services” stated they would “meet with all levels of elected officials their staffs and governmental officials to advocate for the listed and approved legislative agenda,” which included funding for the bridge.
That also sounds a lot like a lobbyist.
In his 2007 proposal for “State and Federal legislative services,” lists himself, former state representative Tom Osthoff and former General Mills and Gelco executive Jack Bell as principals in the Conach group. However, there are no records of state lobbyist registrations for any of them on file with the CFB as far back as 2005.
COOK GRILLS HARYCKI AND HANSEN
’s hiring didn’t come without considerable discussion, raised chiefly by Cook, the City Council’s lone Bachmann Boondoggle critic.
Cook questioned the qualifications of the group and suggested that due diligence be done before hiring them. But City Administrator Larry Hansen and Mayor Harycki rose to ’s defense, citing ’s past volunteer work on the Brown’s Creek project and the fact that has “lots of connections.”
Cook questioned the lack of competitive bidding for the position and, according to minutes from the April 19 Council meeting, Hansen “noted that the City did go through the interview and RFP process for lobbying services a number of years ago and he was not very impressed with many of the candidates and the costs considerably higher.”
Cook also challenged the transparency of the process and the position. She argued that the contract language describing the time devoted to work was vague and ambiguous and suggested that provide the City with monthly reports on what the group was working on. Cook was concerned that the bulk of the work would be done on the Bachmann Boondoggle at the expense of the armory, Zephyr trail and levee projects, which she supported.
But according to Council minutes, “Mayor Harycki suggested that any published reporting may impede some of the ongoing discussions,” so that was rejected. The contract states only that “The City will rely upon the Consultant to put forth such effort as is reasonably necessary to fulfill the spirit and purpose of the Contract” and that “the nature of the work done by consultant will be reviewed at least quarterly to determine whether work should be deleted or added based upon changed circumstances.”
In the end, the only change to Campbell’s contract was to adjust the time required to terminate the contract from 90 days to 60 days—a move that Harycki initially resisted. The contract sailed through the Council with Cook casting the only dissenting vote.
THE SMELL TEST
With no accountability or transparency, it’s difficult to determine exactly what is getting for its $1,500 a month in “legislative support.” It’s even more difficult to figure out how one works “to secure the required support of the Federal Government, State of and any administrative Department of either entity for the approval and funding of the pending St. Croix River Crossing at Stillwater” without lobbying.
Mayor Harycki says there is a “fine line” between lobbying and legislative consulting. It will be interesting to see what the Campaign Finance and Public Disclosure Board makes of Harycki’s balancing act.
Something smells rotten in , and it ain’t dead sheepshead on the beach.

Ripple in Stillwater author Karl Bremer has filed a formal complaint with the Minnesota Campaign Finance and Public Disclosure Board (CFB) over the alleged lobbying of unregistered lobbyist Mike Campbell on behalf of the City of Stillwater. After reviewing the complaint, the CFB will determine whether to proceed with an investigation of the matter. According to the CFB, within 30 days, the board will make a public finding of whether or not there is probable cause to believe a violation has occurred.

Also, a check of federal lobbyist records shows no record of lobbyist registration for Mike Campbell or The Conach Group at either the U.S. Senate or U.S. House of Representatives.