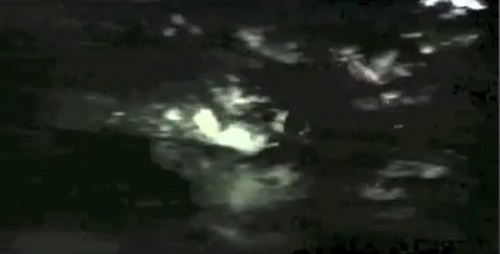 Is Bigfoot on the prowl in Washington County?


Out here in rural Washington County, wildlife is abundant. I shoot all the deer I need within 100 yards of my back door. Wild turkey are as common as crows. Black bear are regularly spotted in the township, and even the occasional cougar.
But last month may be the first alleged sighting of Sasquatch in Washington County, and Ripple in Stillwater has learned that it occurred about 5 miles or less from our world headquarters here in Stillwater Township.
On July 6, a farmer and his wife were walking through the woods next to their hayfield north of when they heard a low grunting sound. The farmer whipped out his new iPhone and shot about 5 seconds of video of something running through the woods. It wasn’t until he looked at it a few days later that he realized that it may not have been a deer after all.
An internet denizen who goes by the name of "SasquatchWatcher" posted the video to youtube, with his own annotations. He described the alleged Bigfoot creature in the video as an “Auburn Sasquatch,” a reference to its hair color, and left no doubt as to his opinion of the video’s authenticity.

"This is a wonderful example of how adept Sasquatch are at hiding and moving through thick brush,” he notes, and cautions that “We know of at least one nutbar in Minnesota who is actively trying to kill a Sasquatch with his .306.”


The narrator states that the video was shot “near the ” and that “there have been a number of sightings up and down, we’ve had a number of experiences two hours west and two hours north of this spot.”
According to the video, the unnamed videographer stated:
“We are in (blank) town in (north of ). During a usual walk in the woods next to our hayfield, we thought we scared up a deer, but hearing a low, odd-sounding grunt, we started moving a little faster. I just bought an iPhone so I obsessively photograph or video everything. The video surprised me when I viewed it days later. Doesn’t look like a deer to me. Time was just minutes after sunset.”
The narrator describes various markings and movements of the figure in the video—“all over Auburn hair, high shoulders, gray hands, pigmentation line on hand, muscles move when right foot stomps”—and notes that they match other Sasquatch sightings on record.
The video notes that "The filmer answered a few questions, realized this was serious and wisely chose not to pursue it."


Ripple in has its own theories about what our nearby farmer may have captured on video. What do you think?
Posted by Karl Bremer at 9:51 PM