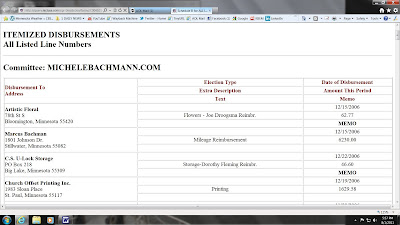 
Michele Bachmann may wish to shield her husband Marcus from the prying eyes of the national media as she seeks the presidency. But both she and Marcus have some explaining to do about a $6,230 payment from her 2006 campaign to Marcus for “mileage reimbursement.”
The payment was made on , and was reported on Bachmann’s year-end Federal Election Commission (FEC) statement from 2006. It covered the period of to . Curiously, Marcus’ last name was misspelled on Bachmann’s own FEC report.
Based on the federal mileage reimbursement rate of 44.5 cents/mile at the time, that payment represents exactly 14,000 miles. That’s a lot of miles that Marcus put on for Michele's campaign in 34 days—418 miles a day to be exact—especially considering Marcus claims he drove them a month after the 2006 election was over. It would be interesting to see Marcus’ mileage logs from that busy month on the road.
DumpBachmann.com thought the expense was a bit suspicious at the time, and noted the sizeable disbursement on . As usual, it was ignored by the mainstream media and nothing more was ever heard about it. 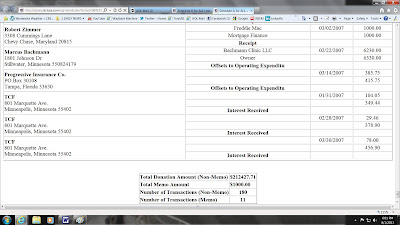 Then, on Bachmann’s next FEC report for First Quarter 2007, a mysterious entry showed up: a receipt to the campaign from Marcus Bachmann for the exact same amount as the earlier mileage payment—$6,230. The entry is identified as “Offsets to Operating Expenditures,” which according to FEC rules includes refunds, rebates and returns of deposits.  An aggregate total of $6,530 is listed in the same entry, but it’s not clear where the other $300 came from.
Was this refund from Marcus Bachmann an admission that the “mileage reimbursement” was erroneously paid to him and if so, what prompted it?
Ripple in has asked Bachmann’s campaign for an explanation of Marcus' mileage mystery. Maybe the FEC should too.

The additional $300 shown in the aggregate total for Marcus Bachmann's campaign "donations" is most likely for this receipt of a donation from Marcus Bachman (sic) to Michele's campaign: $300 for "personal use of vehicle" dated Dec. 11, 2006.

H/t to City Pages for spotting this.
Posted by Karl Bremer at 10:19 PM