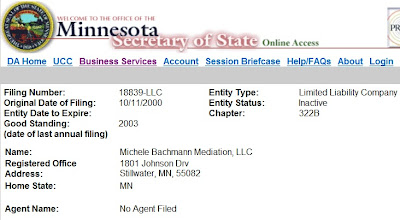 Since Michele Bachmann announced her candidacy for president, national and international media have been rummaging through the Dumpster of her life for whatever details about her past they can uncover among the refuse. Much of what is known about her professional and political career has become a staple of her biography: Graduated from Anoka High School in 1974, graduated from Winona State University in 1978, graduated from Oral Roberts University in 1986, got a tax law degree in 1988 from William and Mary School of Law, worked for the IRS from 1988-1993, got elected to the Minnesota State Senate in 2000, and elected to Congress in 2006.

But those seven years between the IRS and State Senate seem to be missing a few pages—particularly anything about "Michele Bachmann Mediation LLC," a business that even Bachmann is uncharacteristically silent on.

You won’t find anything on Bachmann’s official Congressional website about Michele Bachmann Mediation LLC. Nor will you find anything in her bio on her presidential campaign website. Nothing in her Wikipedia entry either. But the alleged business did exist—at least on paper—and was registered with the Minnesota Secretary of State’s office from October 2000 to 2003. The business is now listed as “inactive.”

A business listing for Michele Bachmann Mediation LLC on manta.com describes it as a “Communication Services, NEC” company with an SIC code of 4899. Dun & Bradstreet also listed Michele Bachmann Mediation LLC under “communication services.” Other companies similarly listed with the SEC include satellite and wireless telecommunications companies, not mediation services. Estimated annual revenue of the LLC, according to the manta.com listing, was $67,000. Bachmann’s old home address in Stillwater is listed as the business address.

Bachmann’s political websites simply gloss over the missing seven years between the IRS and the State Senate.

“Prior to serving in the U.S. Congress, Michele was elected to the Minnesota State Senate in 2000 where she championed the Taxpayers Bill of Rights. Before that, she spent five years as a federal tax litigation attorney, working on hundreds of civil and criminal cases,” her campaign website states.

“Prior to serving in the U.S. Congress, Bachmann served in the Minnesota State Senate from 2000-2006. As a Minnesota State Senator, she championed the Taxpayers Bill of Rights. Before holding elected office, Bachmann worked on hundreds of civil and criminal cases as a federal tax litigation attorney,” her congressional website states.

Bachmann never fails to mention her and her husband’s Christian counseling clinic wherever she goes. And she's bragged about virtually every other job she claims she's held, from bus driver to fish cleaner. Yet she’s never spoken publicly about her alleged mediation business.

Despite the avalanche of news stories about Bachmann in recent months, including a 9,000-word opus in the New Yorker magazine, you won’t find a word about Michele Bachmann Mediation LLC in any of them.

There’s nothing in public court records to be found about Michele Bachmann Mediation LLC either, and nothing turns up in searches anywhere else. So what gives?

Did Michele Bachmann ever actually do any mediation, and if so, for whom? Was it just a scam to claim a home-office deduction on her taxes without ever actually doing any business? It is known that the Bachmanns spent part of those years protesting at abortion clinics. Perhaps she called that activity “mediation” much like other such protestors call it “sidewalk counseling.”

Bachmann has already tried to claim her family’s pray-away-the-gay clinic is off-limits to reporters (unless she brings it up). Maybe she’d rather answer some questions about her other alleged business instead. If, in fact, it ever existed at all.
Posted by Karl Bremer at 7:38 PM