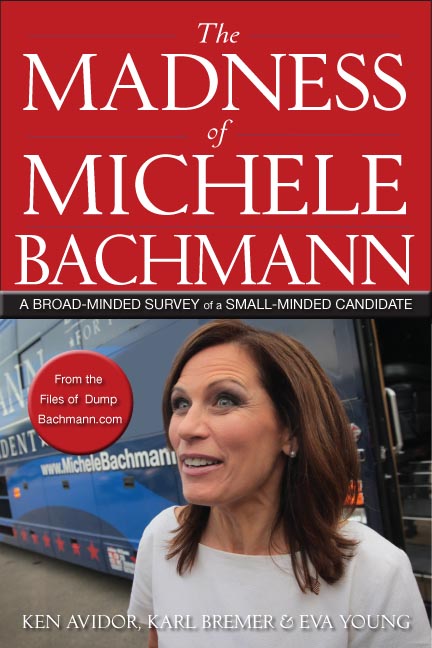 While some in the mainstream media want to write off Michele Bachmann already in the loopy 2012 GOP presidential race, the co-authors of Ripple in Stillwater and DumpBachmann.com have just written her up.

The Madness of Michele Bachmann: A Broad-Minded Survey of a Small-Minded Candidate, is the new book on our absentee congresswoman by me, Ken Avidor and Eva Young. It's due out in early December from John Wiley & Sons Publishing--just in time for your holiday shopping--but you can pre-order it on Amazon.com now.

Bachmann's own book, Core of Conviction, is scheduled for release about a week earlier. Given Bachmann's penchant for burying the ol' Truth-o-Meter needle deep in the Pants-on-Fire zone, we're fairly certain that our assessment of her unseemly political career will be far more accurate and revealing than her own. We're also pretty sure that most of the main characters in our book won't find a place in Michele's, even though they are central to understanding her "core of conviction."

Another big difference between our book and hers: we didn't need a ghost writer.