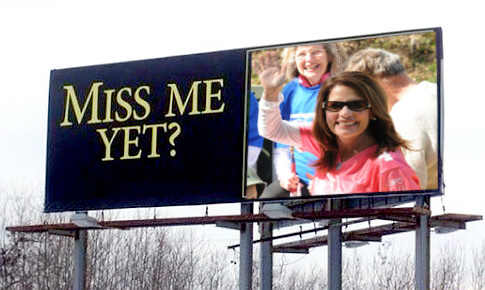 
Michele Bachmann has failed to show up for work in Congress 58.7 percent of the time since July 1, missing 145 out of 247 roll call votes. The last time Bachmann even cast a vote was August 1. If we were to pay our goldbricking congresswoman on a pro rata basis for the time she was actually working for us in the past three months, we would dock her $174,000 annual paycheck $25,534.50.

Unfortunately, Congressional pay isn’t performance-based, and there are no penalties for not showing up. I don’t foresee Bachmann voluntarily forfeiting any of her ill-gained government salary either.


Recall for nonfeasance isn’t an option. Since 1996, state legislators, the governor and other executive officers, and judges can be recalled for “malfeasance or nonfeasance” or conviction of a serious crime. But shiftless, no-show members of Congress like Bachmann are free to come and go to work—or not come at all—as they please.


The votes Bachmann has missed aren’t inconsequential little matters. As noted here earlier, Bachmann skipped voting on the 2012 Intelligence Authorization Act, even though she is assigned to the House Intelligence Committee, and partied with football fans at the next morning instead. That same day, Bachmann also missed the House’s solemn remembrance of 9/11 and passage of a resolution commemorating the terrorist attacks that day.

Bachmann gets a lot of campaign mileage out of bashing the Environmental Protection Agency (EPA), one of her favorite whipping boys. Last month, Bachmann pledged to lock the doors and turn out the lights at the “job-killing EPA.”

So last week, one would think she’d be the “tip of the spear,” as she likes to call herself, to pass H.R. 2401, which calls for analyses of “the cumulative and incremental impacts of covered rules and actions of the EPA concerning air, waste, water, and climate change for each of calendar years 2016, 2020, and 2030.” Such analyses, the bill states, would include “estimates of the impacts of such rules and actions on the global economic competitiveness of the United States, electricity prices, fuel prices, employment, and the reliability and adequacy of bulk power supply in the United States; and (2) a discussion and an assessment of the cumulative impact on consumers, small businesses, regional economies, state, local, and tribal governments, local and industry-specific labor markets, and agriculture.”

But when it came time to hold the EPA accountable for its “job-killing” policies, Bachmann was nowhere near the voting button in the House chambers. Instead, she was in on September 23 being introduced at a campaign rally by her high-flying pal Pastor Mac Hammond.

Bachmann never fails to remind her audiences that she is a small-business owner with her husband. But H.R. 2608, a bill to extend most Small Business Act programs through FY2012 and repeal authority for a number of others, escaped Bachmann’s attention—and vote—while she was in with Pastor Mac as well.

Bachmann is nothing if she is not about children (you know, five biological and 23 foster). So you would think that H.R. 2883 to extend through FY 2016 such Social Security programs as the Stephanie Tubbs Jones Child Welfare Services Program and the Safe and Stable Families Program, and enhance a court improvement program “to serve the purpose of increasing and improving engagement of the entire family in court processes relating to child welfare, family preservation, family reunification, and adoption” would be right up her alley. But her “titanium spine” evidently turned to jelly. On September 21, when the House was voting to support children, Bachmann was probably cramming misinformation and lies for the next night’s debate, because she didn’t cast a vote on that bill.

The day before, Bachmann chose an Iowa meatpacking plant photo op over voting for the "Veterans Health Care Facilities Capital Improvements Act of 2011," which authorizes major medical projects and leases for the Department of Veterans Affairs. But what's supporting medical care for our veterans when you can stand amidst a few thousand pounds of hanging beef in a slaughterhouse for the cameras?


On September 15, Bachmann failed to show for votes to reauthorize the International Religious Freedom Act of 1998, and on the “Protecting Jobs from Government Interference Act.”

And on September 13, Bachmann, who helped start a charter school in her hometown of , walked on a vote on H.R. 2218, the “Empowering Parents Through Quality Charter Schools Act.” The Act replaces “the current charter school grant program with a program awarding grants to states and, through them, subgrants to charter school developers to open new charter schools and expand and replicate high-quality charter schools.”
But Michele couldn’t be bothered with improving charter schools—not when she had a date on the Today show to defend her outrageous and dangerous comments on the HPV vaccine in the previous night’s debate.

Bachmann’s supporters and many in the kid-glove media have always loved to talk about her boundless energy and dedication to issues. What they fail to acknowledge is that her energy and dedication are rarely, if ever, expended on anything but promoting herself. As the numbers prove, that has worsened exponentially since she officially started running for president, to the point where her constituents should be demanding  a refund.


Gifts to the
Department of the Treasury
Credit Accounting Branch
, Room 622D