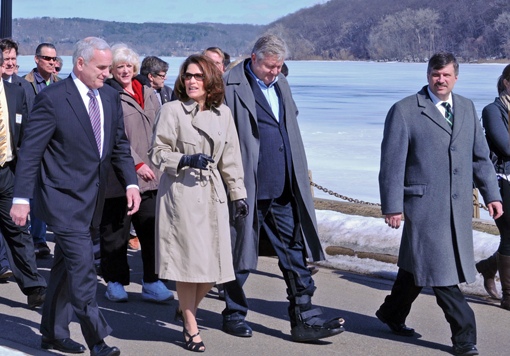 Almost 20 years ago, I stood with Paul Wellstone on the veranda of a large Stillwater Victorian home overlooking the from halfway up Myrtle Street hill.  It was a fundraiser for Paul’s campaign, and I managed to corral him for a few minutes to talk about the proposed freeway bridge across the .

I directed his gaze south of , and asked how he’d like to see a massive new bridge crossing the federally-protected bluff-to-bluff, which then, as now, was being heavily promoted by business and development interests. Paul winced, knowing full well how close to their heart many of his supporters held the and the Wild & Scenic Rivers Act. He also knew how desperate other factions of his own party were to push this bridge forward, despite the federal prohibition against adding new structures on rivers protected under the Act.

The conflict went even deeper than that. One of Paul’s heroes and mentors, Walter Mondale, was the Senate co-author of the Act in 1968, and still had a place on the river.

“The passage of the Wild and Scenic Rivers Act was one of the proudest moments of my political life,” Mondale told the Department of Natural Resources’ Minnesota Conservation Volunteer magazine in 2006. “Still, I've always recognized the designation as a starting point for protection of the . It bought us some time, perhaps. But sustaining the values of the will require that each generation make a renewed commitment to the cause. We will need to be most vigilant on the local level, making land-use decisions carefully and responding to threats to the riverway as they arise.”

Paul never responded to my question out on the veranda that day with anything more than that quizzical grin of his that suggested he was listening. I wouldn’t presume to guess whose side he ultimately would come down on. He never had to make that choice. But I’d like to think that he would have erred on the side of the river, and not greedy business interests and land developers, if he were faced with the decision of whether to circumvent the Wild & Scenic Rivers Act  as one of his successors, Amy Klobuchar, now seeks to do.

Klobuchar, a Democrat up for re-election next year, is the author of the Senate version of Rep. Michele Bachmann’s bill, H.R. 850, to do an end-run on the Act. Yesterday, the House Natural Resources Committee amended Bachmann’s bill to adopt Klobuchar’s language, and then moved the bill to the House floor. ’s other Democratic senator, Al Franken, supports the Klobuchar-Bachmann bill, which will likely grease the skids for its passage in that chamber. Democratic Governor Mark Dayton, after initially announcing that all bridge options were on the table, abruptly reversed himself a month later and became an enthusiastic supporter of the Klobuchar-Bachmann bridge.

Proponents of the massive $690 million freeway bridge have waged a disingenuous—and sometimes secretive—lobbying war of misinformation. Klobuchar and Franken have pitched the Klobuchar-Bachmann bill as a “one-time exemption” and tried to downplay the potential for it to set a “dangerous precedent” for future such exemptions, as Mondale has predicted.  However, former Congressman James Oberstar, longtime chair of the House Transportation Committee, told a recent forum on the bridge to pay no attention to claims that so-called one-time exemptions will not set a precedent. In his 35 years in Congress, Oberstar said, he’s seen such promises broken “over and over again.” He’s even been guilty of it himself, he confessed.

Klobuchar also has leaned on the reprehensible excuse that because there’s already a power plant on the river south of the proposed bridge site—Xcel’s Allen S. King plant—adding another scar to the face of the nearby makes perfect sense. What she fails to mention is that the was brought under the protection of the Wild & Scenic Rivers Act in 1972, in large part, to prevent another riverway development like the King plant from despoiling it.

Bachmann introduced her legislation to make it appear like she was doing something in Congress. But as with everything else on her legislative agenda, she has abandoned it in favor of her self-promotional run for president. She didn’t even bother to show up for the only full committee hearing for her marquee bill yesterday; she was in campaigning instead.

So what’s gotten into Klobuchar and Franken, and DFL Governor Mark Dayton? One source, a transportation consultant and former longtime congressional staffer, told me recently that the word in Washington is that Klobuchar introduced her bill to inoculate herself again a Bachmann claim to victory on the bridge should Bachmann challenge Klobuchar in 2012, which long has been rumored. The same source said Franken truly wasn’t wild about supporting the bridge, but was only doing it to provide cover for Klobuchar. ’s erratic behavior and flip-flops on the issue, according to several sources, is inexplicable but not surprising.

Bachmann’s bill was amended yesterday to adopt the language of Klobuchar’s. It was later passed out of the House Natural Resources Committee on a 30-14 vote, with all Republicans voting in favor and all but four Democrats voting against. It was passed out of a House subcommittee earlier this year on a voice vote. The next stop will be a full House vote. Klobuchar’s bill has had one subcommittee hearing to date.

If the Klobuchar-Bachmann bill to open the flood gates for billion-dollar bridge exemptions to the Wild & Scenic Rivers Act becomes law, the blame will rest squarely with Minnesota Democrats Klobuchar, Franken and . Bachmann never could have passed this bill on her own. She has shown zero interest in anything but promoting herself for president since she first began publicly speculating about running last year, and has not cast a single House vote since August 1.

Once Klobuchar and Bachmann get their way, river advocates everywhere should be on their guard. Despite the authors’ claims to have written a tightly drafted bill that will trash only the St. Croix River, the next time developers on any protected river want to change the rules of the Wild & Scenic Rivers Act, they’ll merely have to point to the exemption and say “I want mine now.”

I hope environmentalists remember this come election time when their boondoggle-supporting “friends” in and seek their expected endorsement and vote. They should say “Thanks, but not this time.” Because for some of us, this is our BWCA. Our . Our . Cramming this bridge down the throat of our and spitting on the legacy of one of the greatest pieces of natural resources legislation ever passed will be an unforgivable sin that we will not soon forget.