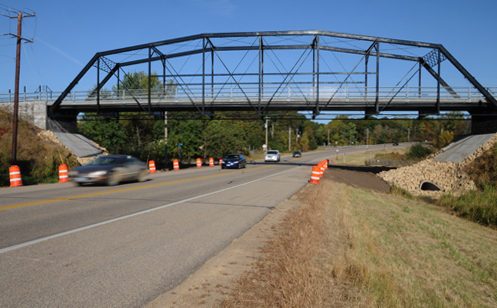 Not every Stillwater bridge is a boondoggle


An historic bridge has begun its third life in 134 years as part of the Gateway Trail between the city of and . The bridge will now serve bikers, hikers, rollerbladers and horseback riders crossing Washington County 15 (Manning Avenue) on the popular East Metro state trail.


This isn’t your run-of-the-mill span. This bridge has been around the state and has a few stories.


The historic 378-foot was born in in 1877. It was constructed as a wood-deck, wrought iron truss bridge across in . In 1937, it was dismantled and moved up north to serve as a Minnesota Highway 65 crossing over the in southeastern near the town of . Traffic loads that included heavy logging trucks eventually became too much for the old bridge and it was replaced and dismantled once more in 2009.


Like the historic lift bridge, the is on the National Register of Historic Places. It was listed there in 1998, and is one of 24 bridges on the Minnesota Department of Transportation’s (MnDOT) list of historic bridges to preserve. Also, like the more famous lift bridge over the , the is what is known as a “camelback-through-truss” design. Its wrought-iron construction is much less susceptible to rusting than steel, which explains its longevity.


Officially called Bridge No. 5721 in MnDOT parlance, the also has been called the , named for local Silverdale resident Louis Zeleznikar, who lived on the and died in 2007.


The was scanned using laser survey equipment to measure the geometric properties of each member (check out this cool video) and moved to , where it remained in storage until this year.


MnDOT began construction of earthen ramps on either side of Washington County 15 north of MN 96 in August 2009. Old Bridge No. 5721 was rehabilitated, reconstructed on-site and set on concrete abutments built into the berms on May 20. A new concrete deck was poured in June. paid $100,000 of the approximately $2.8 million cost for relocating the bridge.
The bridge was opened to nonmotorized, pedestrian and equestrian traffic in September. Its 18-foot width easily accommodates three lanes of “traffic” high above the speeding motorists on County 15 below.


ANOTHER RAIL-TO-TRAIL
That’s not the only good news for bikers and hikers. Work is beginning on the Brown’s Creek State Trail, which will connect the Gateway Trail at its junction with MN 96 to the St. Croix National Scenic Riverway in . The 6.5-mile section will use the old Zephyr dinner train railroad right-of-way. kicked in $1 million toward the $4.2 million right-of-way purchase price. The state will pay for the remainder, including the cost of removing the old ties and rails, which will begin this fall. Funding for the project was in the 2011 bonding bill.


The trail may be open for walking later this fall. The Department of Natural Resources will pave 2 miles of the trail next summer and the remainder as additional funds are secured. Another bridge over eventually will be built for the Brown’s Creek Trail.


The DNR will hold a public meeting and open house on the Brown’s Creek trail at the Stillwater Public Library October 19 from to 7:30 p.m.