A window into the hidden world of New Zealand's white herons 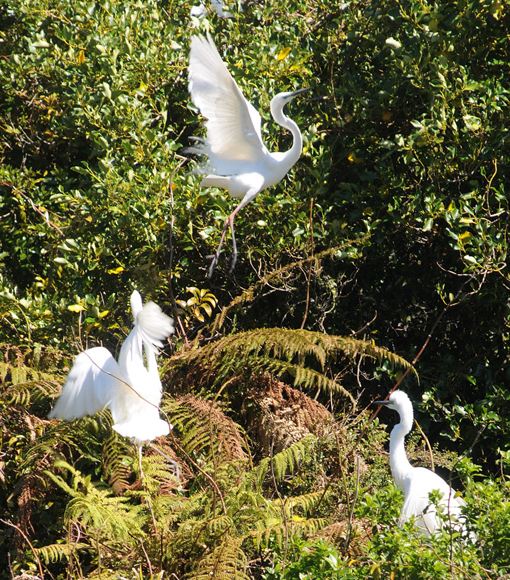 
Deep in a secluded lagoon near the hamlet of Whataroa on ’s South Island West Coast, a spectacular avian display takes place between October and March when the country’s entire population of majestic white herons returns to nest at the colony. Dozens of these magnificent birds—called Kotuku by the native Maori—take up residence in kowhai, mahoe and kamahi trees and in the crowns of fern trees alongside a colony of even rarer royal spoonbills that also migrate to this remote backwater north of Okarito Lagoon to breed.


The regal white herons mingle as one with the equally noble royal spoonbills in this secret, otherworldly lagoon.  Gliding across the bronze-colored water, these iridescent creatures are like poetry in motion. The two spindly, white birds are distinguished in flight by their markedly different bills and the crook of their neck; the sharp-billed herons fly with their necks kinked, while spoonbills extend their broad beaks and long necks in flight. Together here during the breeding season, they present birders with a marvelous opportunity if you schedule your visit right. For much of the rest of the year, the herons and spoonbills are not even at the lagoon.


We arrived in late November—prime time to witness them resplendent in their breeding plumage cavort with one another while others sit on the nest with their fledgling young.


The trip back into the hidden sanctuary is part of the thrill of the white heron experience. White Heron Sanctuary Tours in Whataroa is the exclusive operator allowed into the sensitive area by the Department of Conservation and works closely with the Department to protect the heron and spoonbill population.
After a short van ride across the open glacial plain with the visible in the distance, we arrived at a launch and boarded a jet boat. Apprehension about the propriety of roaring up and down the river to view a rare bird nesting area gave way to awe as our tour guide/pilot deftly guided the craft down the winding at speeds of 50-60 kph, shooting between deadheads and flying over gravel bars in 6 inches of crystal-clear water. And, as we would soon find out, the jet boat doesn’t get anywhere near the sanctuary.

The well-muffled roar of the boat’s jet propulsion scarcely got a nod out of the cows grazing contentedly along the river as we flew by. An occasional Putangitangi, the paradise shelduck, took flight and kept pace to escort us down the river. After about 20 minutes, we disembarked and boarded our third means of transport—an open-air jitney pulled by an ATV—that took us over to a different river.


Yet another boat ride awaited us there—this time on a double-decker pontoon that chugged quietly back up the murky, stained waters of the , which drains the middle of the floodplain. As we cruised along, we began to see increasing numbers of spoonbills and white herons skimming low across the water or perched on the shore fishing.

Our guide eased the pontoon up to the dock and we set out on the last leg—a short hike on a boardwalk through the swampy forest to the viewing stand. Along the walkway, box traps are set for stoats, a weasel-like varmint that preys on the eggs of white herons and other birds, including the endangered kiwi.


Visitors become hushed as they approach the two-level viewing stand across the lagoon from the nesting area. Once inside the wooden shanty, it’s like looking through a window into another world. The verdant forest spread out before you, thick and tangled below with taller kahikatea trees towering above, is punctuated with brilliant white herons and royal spoonbills. Dozens are sitting on nests while others perch like sentries or soar back and forth feeding their newly hatched young. 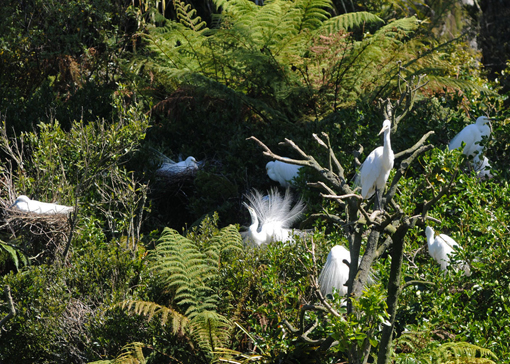 Fantastic plumes spray light off their backs and wings as they sit elegantly on their nests and preen. When they lift off, their sleek bodies float with ethereal grace on their immense wings, announced by an occasional guttural croak.


The viewing stand is equipped with multiple pairs of high-quality binoculars, allowing everyone ample opportunity to zoom in close on the birds’ family life for as long as they wanted. It appears to be unobtrusive to the birds’ activities, although during nesting when the birds are more protective, it’s sometimes necessary to partially shutter the large openings in the stand to keep from spooking them.


When the herons start arriving at the colony in August or September, they begin the magical transformation into their breeding stage. Their yellow beaks turn black, the facial skin turns blueish-green and long, spiked plumes develop on their backs and wings. These plumes long have been highly prized by humans. Maori thought them to be sacred and used them to adorn their chiefs and other tribal elders. Their desirability for women’s hats in the 1800s nearly decimated ’s population of the birds when their breeding ground was discovered in 1865. By 1941 only four nests remained, and the area was established as a reserve. It since has received increasing levels of protection. 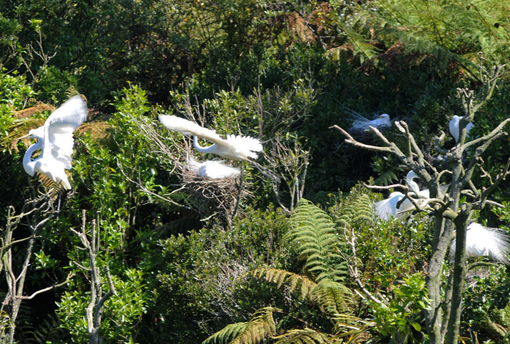 Once they arrive at the lagoon, the males build a platform upon which they perform a dazzling mating ritual to compete for a mate. When birds are paired off, the female builds another nesting platform of fern fronds and sticks anywhere from 8 to 40 feet in the air.


Between 40 and 50 pairs of white herons typically breed at the site each year. Of the three to five eggs laid, only one or two usually are fledged. Their survival largely depends on weather conditions during nesting season, when storms can blow nests down, or flooding occurs in the nearby Okarito Lagoon, which can make stalking their diet of whitebait, eels and crayfish difficult.


The birds disperse throughout in the winter after breeding, but the colony remains ’s only heronry. Their numbers reportedly have stabilized at between 100-120. How the colony was established in the first place is still somewhat of a mystery. Egretta alba modesta is found throughout , , and as well. Some theorize that perhaps hundreds of years ago, winds carried a flock from across the , and they established this colony on the West Coast just a few miles from the sea.


Even more rare than the white heron in is the royal spoonbill, or Kotuku Ngutu Papa (board-billed kotuku), that has been coming to the same lagoon to breed since 1949. Because the royal spoonbills nest in the much taller kahikatea trees, they’re more exposed and vulnerable to storms. As a result, fewer chicks are fledged. Their population, while stable, is far less than the white heron’s in .


The royal spoonbill is slightly shorter and heavier than the white heron. It sweeps its black, shovel-like bill from side to side as it wades the swamps and estuaries to feed on shellfish, frogs and other aquatic life.


Similar to the white herons, plumes extend off the back of the royal spoonbill’s head during breeding. They disperse across both the South and North islands after the nesting season, usually to estuaries along the coast.


The lagoon is also home to a kawaupaka, or little shag, rookery. The little shag is common throughout and nests near the white herons and royal spoonbills. Slightly smaller than either of its neighbors, the little shag’s plumage ranges from all black to black and white, with black feet, a yellow face and stubby yellow bill.


After about 45 minutes, we left the viewing stand in silence and with a sense of reverence at what we had just seen. The serene pontoon ride back down the Waitangiroto gave us a chance to ruminate on the experience as we passed an intermittent heron or spoonbill wading along the riverbank.


As the jet boat flew upstream and across the shoals of the Waitangitaona, it felt like we were being transported forward in time from a visit to an ancient world, where these wondrous monarchs ruled the sky.


To the Maori, Kotuku is a sacred symbol of all things rare and beautiful. It even shows up in a Maori funeral chant that concludes: “Ko to kotuku to tapui, e Tama – e” (“Kotuku is now thy sole companion, O my son!”). Visit the White Heron Sanctuary at Whataroa and see for yourself why.


Whataroa is on the ’s West Coast on State Highway 6, 103 km south of Hokitika and 32 km north of Franz Josef Glacier. White Heron Sanctuary Tours is on the west side of the road in the middle of the village.


White Heron tours run from late October to March. A rainforest nature tour by jetboat in the Waitangi Roto Nature Reserve is run during the rest of the year. Cost for both tours is $110 for adults and $45 for children 12 and under. Tours are run daily at approximately , , and Studio, motel and cabin units also are available at the Sanctuary Tours Motel next door.


A visit to the tiny Kotuku Gallery in Whataroa is time well-spent before or after the 2.5-hour white heron tour. It features a splendid collection of bone, jade, wood and antler art pieces by a local Maori carver and his family. And there’s nothing like buying direct from the artist.